At least 18 people have been killed in intense fighting in eastern Libya, medics say.

The fighting started when Ansar al-Sharia militants attacked forces loyal to renegade General Khalifa Haftar in Benghazi, who hit back with airstrikes.

Benghazi is at the centre of a two-week long campaign by Gen Haftar’s forces against Islamist armed groups.

The government in the capital Tripoli has condemned the campaign, calling it an “attempted coup”.

It is not known whether the casualties from Sunday night’s fighting are military or civilian, but both sides have accused the other of firing indiscriminately in residential areas.

Dozens were also reported injured in the neighbouring city of Al-Marj.

While Libya and in particular Benghazi has been plagued with violence since the uprising against Muammar Gaddafi, the latest fighting has been particularly ferocious.

Combat helicopters have reportedly been used to carry out strikes against rival armed groups in the west of Benghazi.

Eyewitnesses said one of the rockets fired on Sunday missed its target and instead hit a university engineering faculty.

The groups being targeted by Gen Haftar’s forces are the Ansar al-Sharia Islamist militia and the February 17 brigade, which fought against Gaddafi in 2011.

The groups are accused of being behind much of the violence and assassinations in Benghazi in recent years, but they deny this.

Libya has no functioning national army and has had to rely on armed groups to provide security.

However, the groups have clashed on many occasions over political and ideological issues. 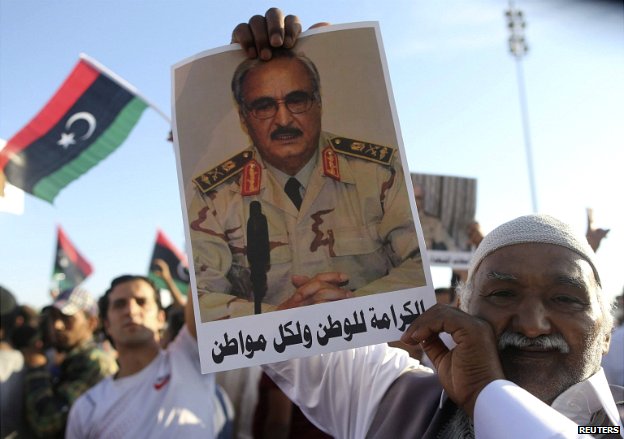 Dozens of state bodies have already pledged their support to him.

But the government called his assaults an “attempted coup” and ordered the arrest of those taking part.