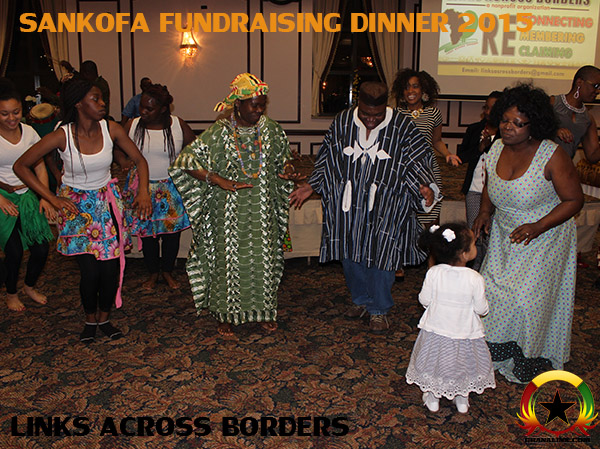 April 25th 2015. Sankofa; a word from the Akan language from Ghana that translates to “reach back and get it.” Usually associated with the symbol of a bird with its head turned backwards reaching to grab an egg off its back, the term also related to a person returning to their roots. Sankofa was the centerpieces and theme of the Links Across Borders fundraising event.

Held on Saturday, April 25, 2015 at the Mississauga Coptic Centre, the Sankofa Gathering and Fundraising Dinner was a night that introduced people to the organization and as well helped raised money for future projects. Links Across Borders is an organization that builds libraries in Ghana.

“I’m in the business of building movements,” says founder and CEO of Links Across Borders, Sylvia Morrison.

The event began with an opening speech from Morrison. Within her speech she acknowledged individuals who were there including people who she referred to as the “pioneers”, the original group of students and volunteers who went to Ghana in 2013.

After dinner was served, the night continued with performances. One of the performances of the night was traditional Ewe dancing accompanied by drums from the Ewe Cultural Association of Ontario.

“We don’t have treadmills back home… this is our exercise,” says the president of the Ewe association.

The audience was invited to participate in another performance by a drumming duo, Kwabena and Joy. The duo that were dressed in traditional Ewe clothing, also invited members to learn a short dance routine.

The focus of the night was to help raise money to continue the building of libraries in Ghana. There was a silent auction featuring wooden masks and woven bags. The Sankofa centerpieces were also sold. Different authors that were present sold their children’s books; individuals were able to purchase the books for themselves or could purchase books to be put in the libraries being built in Ghana.

“I have an Oprah Winfrey heart and mind but not the pocket,” jokes Morrison.

Unlike the other years, the library being built this year will not be built from scratch. An Ewe man, who was introduced as Brother Kwabena by Morrison, had a building in his hometown of Opon Valley and asked the organization to create a library within the building.

Links Across Border became a registered company in 2009 and had its first trip to Ghana in 2013. Having constructed two libraries in the Volta Region of Ghana, the organization enlists the help of students and community volunteers to offer their time and strength to build libraries.

“I’m building libraries because it makes me feel good. But it also helps people,” says Morrison.