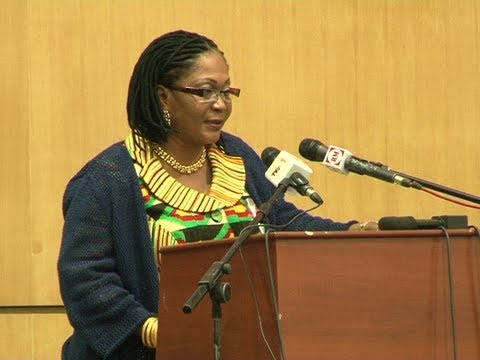 Nana Lordina Dramani Mahama (pictured), first lady of the Republic of Ghana and an internationally respected advocate for empowering women and helping the poor and marginalized, will deliver the keynote address to the Class of 2015 at Fordham University’s 170th Commencement, to be held Saturday, May 16, at the Rose Hill campus.

Nana Lordina — wife of H. E. John Dramani Mahama, President of Ghana — is national president of the Lordina Foundation, a non-governmental organization that works with partner companies and agencies to make health care more accessible in Ghana and to expand educational opportunities.

In addition to working on behalf of the disadvantaged, Nana Lordina strives to advance the cause of educating women and girls as a way to improve communities worldwide.

“In conferring an honorary degree upon Mrs. Mahama, it is we who are honored,” said Joseph M. McShane, SJ, president of Fordham. “Her work with women and children in Ghana and across Africa reminds us of persistence of kindness and the will to make a difference in the world.”

Nana Lordina’s work embraces many pressing public health and educational issues. The Lordina Foundation has provided medical supplies — including, in one instance, an ambulance— to hospitals and health facilities in Ghana, worked to prevent breast and cervical cancer and HIV infection in Africa, and helped provide shelter and vocational training in northern Ghana for women accused of witchcraft and consequently shunned by their communities.

The Foundation also provides food, clothing, and cash for seven orphanages across Ghana and offered scholarships to 21 Ghanaian students to study in China, with support from the Chinese government.

Among her many advocacy efforts, Lordina helped secure the Ghanaian government’s approval of a World Bank program to provide secondary school scholarships to 10,400 Ghanaian children— half of them girls — who come from deprived communities.

“Today, women are accelerating economic growth and improving conditions in their communities across the world,” she said last year in an address at the U.S.-Africa Leaders Summit in Washington, D.C.

“Perhaps if there were more women in decision-making roles around the world, we would create fairer and better societies. Women’s education brings positive changes not just for women but for communities and future generations too.”

Nana Lordina also applauded her husband’s appointment of more women as cabinet ministers as well as other public posts.

Mrs. Mahama was born and educated in Ghana, earning a Bachelor’s degree in Hospitality Management and a Master’s in Governance and Leadership from the Ghana Institute of Management and Public Administration. She became First Lady of Ghana in July 2012, when her husband — then vice president — ascended to the presidency upon the death of his predecessor, John Atta Mills.

She is a first vice president of the Organization of African First Ladies against HIV and AIDS (OAFLA) for West Africa and is premier ambassador of the UNAIDS Global Plan on the “Prevention of Mother-to-Child Transmission.”

Last year, she was honored with a Global Inspiration Leadership Award and inducted in to the Global Women Leaders Hall of Fame at the second Africa-Middle East-Asia Women Summit in Dubai, organized by the Centre for Economic and Leadership Development and the CEO Clubs Network worldwide. Among her other honors, she was awarded the key to the city by the city of Newark, N.J., and given awards for her anti-cervical cancer advocacy in Namibia and Mozambique.