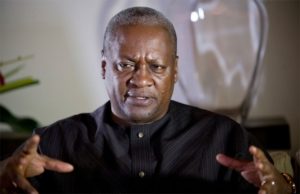 The International Monetary Fund has told Ghana during its talks on a financial assistance programme that it would like to see a freeze on public sector wages, President John Mahama said on Wednesday.

But the government has said that salary levels must take account of inflation, Mahama told Reuters on the sidelines of a conference in Dubai.

Inflation in the West African country stood at a four-year high of 15.9 percent in August. An agreement on public sector wages is seen as crucial to securing the IMF programme, which aims to restore Ghana’s fiscal balance.

“The IMF was recommending a wage freeze …. I think there must be adjustments for inflation. You can’t say you’re not going to do any wage increases over the next three years. As inflation comes down, the need for higher (wage) increases reduces,” he said.

Mahama said he would like to start the three-year deal in January but if an agreement was concluded before then, it might be factored into the annual budget, which is due to be presented in November.

The IMF said last week Ghana’s fiscal problems could hit economic growth hard, as a yawning budget deficit, high inflation and a tumbling currency take their toll on one of Africa’s star economies of recent years.