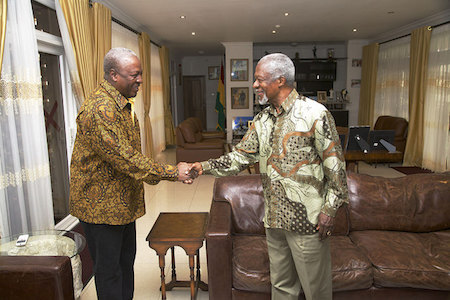 The meeting was held in the private residence of the President.

Announcing the strategic meeting, Mr Mahama wrote the following on his Facebook: “The former Secretary-General of the United Nations, Mr. Kofi Annan, was my guest on Sunday for discussions on a wide range of issues.

“He was accompanied by a member of the Presidential Advisory Group on the Economy, Kwame Pianim”.

It is unclear which specific national issues the statesmen discussed.

However, matters regarding the declining economy and the unstable power supply have become matters of massive public concern in recent times. 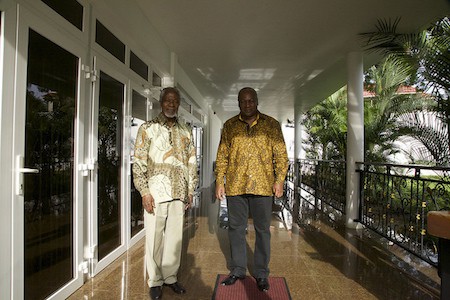 Ghana had its credit rating cut by Moody’s Investors Service after the West African nation warned that tumbling oil prices will worsen its government budget deficit.

The sovereign’s foreign-currency rating was lowered one step to B3, six levels below investment grade, Moody’s said Thursday. The outlook on the grade is negative. Standard and Poor’s assesses Ghana at an equivalent B-, while Fitch Ratings has it one grade higher, at B.

The move was the second downgrade by Moody’s in less than a year for a nation that’s seeking a $1 billion loan from the International Monetary Fund. The second-biggest economy in West Africa is struggling to rein in inflation and grappling with a sliding currency that’s the continent’s worst performer so far this year. 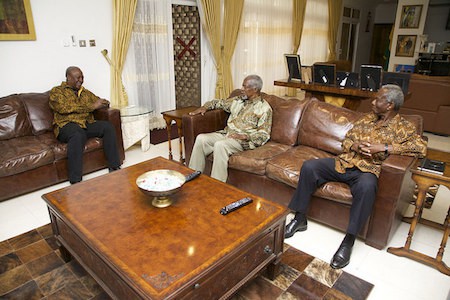 “The negative outlook reflects further downside risk to the country’s debt dynamics and liquidity pressure in the short-term if the country’s policies fail to successfully contain its fiscal deficit, stabilize its currency and address current impediments to higher economic growth,” Moody’s said.