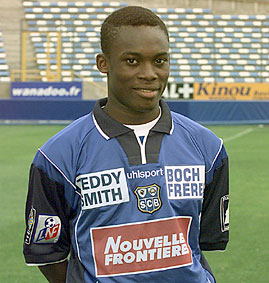 Essien now on the roster of rivals, Chelsea had a trial with the ‘Red Devils’ in 2000 as a 17-year old lad but was not handed a permanent deal, with Ferguson citing work permit problems in the collapse of the deal. The Scot, who was speaking at a forum at the Aspire4Sport conference taking place in Doha, noted “Essien was 17 and it was difficult to get a work permit for him. Also, he had no European passport so we had to let him go.”

Essien later metamorphosed into a hot commodity after impressive stints at Bastia and Lyon, all in France, but Ferguson said the huge asking price of Lyon shifted the Black Stars midfielder’s future away from Old Trafford in 2005.

“Lyon always wanted the best buyers for their players and Chelsea gave the best offer. So he(Essien) joined Chelsea.”

Reacting to suggestions that he is no fan of African players, Ferguson maintained that his selection of players was independent of their race or nationality.

“We had Djemba Djemba (Cameroon) and Quinton Fortune (South Africa), but Fortune had a lot of injuries.

“I have nothing against African players. We need footballers and I don’t care where they come from. If they have the quality, we will take them.” Widely regarded as the most successful manager of his generation, Ferguson declared his support for Qatar in their race for the 2022 FIFA World Cup citing their decision to give back parts of the modular stadia to developing countries as the ‘key card.’

“It is fantastic and they have a marvelous chance of getting the hosts.”

He also dismissed talks of climate whilst lauding the decision of Bid Committee to deploy the solar technology and cooling systems which will address that.

“I was in South Africa and the climate was horrendous. It was cold in Johannesburg, but Durban had the nice weather. It didn’t affect the tournament either.”

The 68-year old who has been at the helm of Manchester United since 1986 ruled out any plans of retiring anytime soon.

“Retirement is for young men, If you are old, you don’t retire.” The four-day conference taking place at the state-of-the-art Aspire Dome, the first of its kind in Qatar is being attended by sports professionals who are discussing sports marketing, sports tourism, sports administration and sports business amongst others.

The Conference under the theme: “Sports business; more than a game” ends on Thursday, November 18. 18 Nov. 10