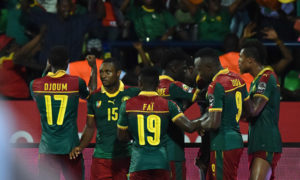 A youthful Cameroon side edged Ghana 2-0 on Thursday in Franceville to reach their first Africa Cup of Nations final in nine years.

Centre-back Michael Ngadeu-Ngadjui and Christian Bassogong home from a tight angle to send an inexperienced Indomitable Lions side through.

The Black Stars won the match’s first corner kick with Afriyie Acquah’s effort and it was effected but Jordan Ayew missed the connection from inside the box on the sixth minute mark.

Two minutes later, there was a huge scare for Ghana after Harrison Afful cleared on the goal line to cut out Adolphe Teikeu’s powerful header on a corner-kick.

After that, Wakaso made a timely sliding tackle inside the box to deny Christian Bassogog who was ready to pull the trigger.

This was when Ghana popped up with an attacking move and Partey played Jordan but new Swansea City signing skied his ball from inside the box.

In the 40th minute Jordan Ayew was put through with a well threaded ball by Atsu but he flashed his effort across the face of goal.

After recess, it was an improved performance from the Black Stars and Partey fired a warning shot.

Atsu made a surging run on the right and cut in to feed the Atletico Madrid man who shot. There’s were shouts of a handball but referee Gamassa waived play on.

Then shortly afterwards, Frank Acheampong made a run and whipped in a cross but Partey was late in arriving.

Acquah burst forward and then split the ball to the right to Jordan who squared a pass but Ondoa was quick to pick it up.

After the hour mark, Wakaso curls a free kick and Ondoa came up with a big save and Partey also tried to shot from outside the box after turning two defenders inside-out.

Captain Benjamin Moukandjo tried with outside of his boot with a low grounder but Brimah was there to collect.

Wakaso committed a fouled Bassogong close to the box and Indomitable Lions curled it into the box. Boye came out to head and his touch beat the advanced Brimah.

The ball dropped to Michael Ngadeu-Ngadjui at the far post and the centre-back turned it into the roof for the opener in the 72nd minute.

Jordan, left unmarked inside the box, could not direct a cut back pass into the net and it was a surprise miss.

Ghana coach Grant threw on Asamoah Gyan to rescue the sinking boat but the veteran had little contribution.