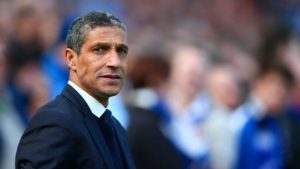 Under the leadership of Chris Hughton, Brighton & Hove Albion sealed promotion to the Premier League for this season after increasing their lead at the top of the Championship to seven points with a 2-1 win over Wigan Athletic at a jubilant Amex Stadium.

Albion missed out on automatic promotion on goal difference in the final game of last season, but after sealing the promotion to the 2017/18 Premier League season Chris Hughton was quoted saying that it wasn’t really necessary.

A dramatic end to the 1996-97 campaign saw Albion recover from being 13 points adrift of safety at one stage to beat the drop on the final day, with Robbie Reinelt netting a historic effort against Hereford.

Having clambered their way back up the ladder, Chris Hughton’s side can now start preparing themselves for a standing among English football