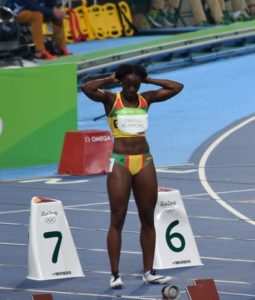 The year 2016 definitely one to remember for Ghanaian born Canadian sprinter Flings Owusu-Agyapong
Flings Owusu-Agyapong (born 16 October 1988) was born in Kumasi, Ghana by Kwadwo Agyapong and Adwoa Akomaa and moved to Toronto, Canada at the age of 9. She started training with the Flying Angels after her sophomore year of high school and made the provincial team going to the National Scholastic Indoor Championships in 2006 and 2007.

She attended Syracuse University on an athletic scholarship, where she broke the school records for the 55, 60 and 100 meters and was 2x 2nd team All-American. She graduated with a Bachelor of science in Public Health.

Flings competed in the 60 metres at the 2014 and 2016 World Indoor Championships without advancing from the first round. She won silver at the 2016 African Championships in Athletics [4] in Durban in the 4x100m relay with 44.05 along with Gemma Acheampong,Janet Amponsah and Beatrice Gyaman. The quartet of the same relay team who won the Silver medal in Durban set a new record of 42.67 thus eclipsed the old national record of 43.19secs set in 2000, to qualify for the Rio 2016 Olympic Games. She qualified for the 100m and 4x100m relay for the 2016 Olympic Games staged in Rio de Janeiro, where she was chosen as the Flag bearer of the team at the opening ceremony of the games.