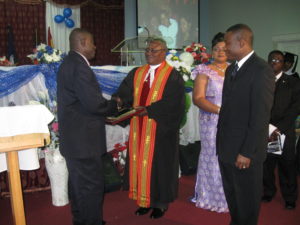 From: Stephen A. Quaye, Toronto-Canada.

It was full of pomp and pageantry when Ghana Methodist Church of Toronto, threw a dinner dance at Forum Banquette Hall over weekend for members and other attendants to dine and officially say good bye to their outgoing reverend minister Very Reverend Jacob William French.

Very Reverend Jacob William Jacob French has finished serving his five years term of office as superintendent in charge of the church in Canada.

Conspicuously present at the dinner dance were Ghana government representatives, traditional rulers in diaspora, officials of the government of Canada, parliamentarians as well as members of the church.

Members enjoyed various gospel songs which set the main hall agog that saw many high profiled personalities at the event dancing their heart out of the evening as the programme traveled deep into the night. 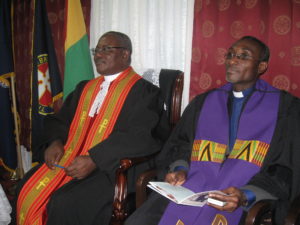 The occasion offered the outgoing minister Very Reverend Jacob William French, the floor to display his dancing skills as he shows of his joy to a successful end of term in office as an administrator in charge of a Ghanaian church in a foreign destination.

Right from the start of the event, many members at the hall were spotted tapping their feet to the beat of songs that were being provided by the Disc Jokey

Indicating their preparedness to take to the floor and dance with the minister of God.

Few minutes into the programme when the master of ceremony [MC] Mr. Appiah Kubi, invited the minister and his wife to open the floor, the cheers that greeted them was as fantastic as white handkerchiefs were all over hovering over the heads of the minister and the wife..

Very Reverend Jacob William French, the wife, Mrs. Lynette Ewurasi French, thrilled attendants with styles of dance which brought a whole lot of admirers onto the floor to cheer them up. 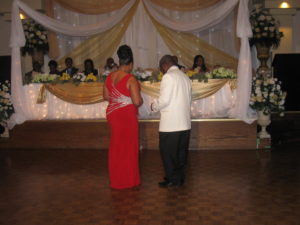 As if that was not enough, members of the Men’s Fellowship in the church who were present at the dinner requested a special song for the minister whom they carried shoulder high.

Various cuisines and drinks were served to the satisfaction of those who attended the dinner as they wished such love feasts are held occasionally since it provides a way for them to socialize and get more connected to one another as Methodist and above all as Ghanaians.

In one of the remarkable speeches, the Member of Provincial Parliament for Etobicoke North [MPP] Dr. Shafiq Qaadri, observed the humility, love and respect demonstrated by Ghanaians all over the country which has made the ruling of the people less difficult and wished that it be reproduce in all communities for the total peace of the country.