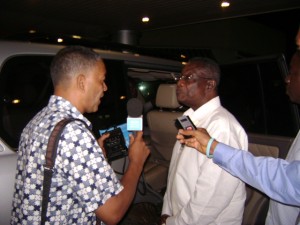 The President, John Evans Atta Mills, has conceded that some of his ministers in the nine-month old administration have not been up to the task.

In an interaction with the media in the Central Region on Saturday, the President said even though he is aware that some ministers are not performing as expected, he would not rush into reshuffling.

The issue of mediocre ministers and calls for reshuffle has been an albatross hanging around the neck of the president. Mr Jerry John Rawlings, a former President and founder of the ruling party â€“ National Democratic Congress â€“ was the first to attack President Mills on his choice of ministers; the Majority Leader in Parliament, Alban Bagbin, on Thursday also backed calls for a ministerial reshuffle.

Joy Newsâ€™ correspondent Kojo Nyarko says President Mills also acknowledged that the below par performance of some ministers is not out of the blue since in every human institution such shortfalls are expected.

The president was on a two-day official visit to the Central Region where he addressed the chiefs and people of Mankessim Traditional area, at the Borbor Fante Akwambo festival. He also addressed separate durbars at Gomoa Assin in the Gomoa West District and Essuehyia in the Mfantseman Municipality. He urged the people to exercise patience since his administration is on track to meet their aspirations.

â€œWe will have committed more blunder if we had decided to rush through things,” he stressed. “There is light at the end of the tunnel.”

He said plans are far advanced to improve the lives of the people in the region.

The President also answered questions on the weak public relations system of his government. He admitted that the system was not the best and assured that he would work on it.

Addressing the issue of limited admission of law students into the Ghana Law School, the President announced the establishment of similar institutions in Kumasi and Cape Coast to deal with the problem.

He also assured the people that construction works on the Cape Coast sports stadium would continue.