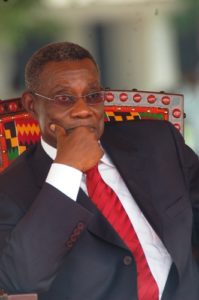 President John Evans Atta Mills on Thursday started a three-day visit to the Eastern Region, where he interacted with the chiefs and people and assured them of better times to come during his four-year mandate.

During a courtesy call on Okuapemhene, Oseadeeyo Addo Dankwa where he took the opportunity to address the chiefs and people of Akuapem, he observed that there is no alternative to the objective of a good head of state to improve upon the living standard of the people.

He said his promise of a better Ghana was meant to ensure an improvement in the lifestyles of Ghanaians and therefore assured the youth of efforts by his administration to provide them with jobs. President Mills thanked the people for endorsing the National Democratic Congress (NDC) in Election 2008 and appealed to Ghanaians to contribute their quota towards national development.

He also addressed a durbar of the chiefs and people of Yilo and Manya Krobo Traditional Areas, where he assured the people that the NDC would not take their support for granted.

President Mills said efforts would be made to supply the Krobo area with basic amenities such as water and electricity.

The Regional Minister, Mr Samuel Ofosu-Ampofo said negotiations were on- going for the acquisition of lands for the establishment of the first Science and Technological Park in the country at Akuapem.

Mr Ofosu-Ampofo said the Ministry of Food and Agriculture in collaboration with the Yilo Krobo District Assembly and the Regional Co-ordinating Council would establish a modern mango market to help provide ready market for the large number of farmers in the Dangbe area.

He said engineers were almost through with their drawings for the improvement of the main road between Yilo and Manya Krobo districts while efforts were being made for the rehabilitation of the Somanya town roads. Mr Ofosu-Ampofo explained that, the district assemblies are being encouraged to buy their own graders to ensure constant rehabilitation of feeder roads to enable the farmers to get their produce to market centres.

Nene Odonkor Tuumeh, Acting Konor of Yilo Krobo Traditional Area, called for the establishment of a mango processing factory in the area to encourage the large number of mango farmers in the area to expand their farms and to create employment for the youth.

He appealed to President Mills to rejuvenate the project to irrigate the Accra Plains to facilitate agricultural development and create jobs for the youth.

The Konor of Manya Krobo Traditional Area, Nene Sackitey, who chaired the function expressed concern about the poor quality water and electricity supply.