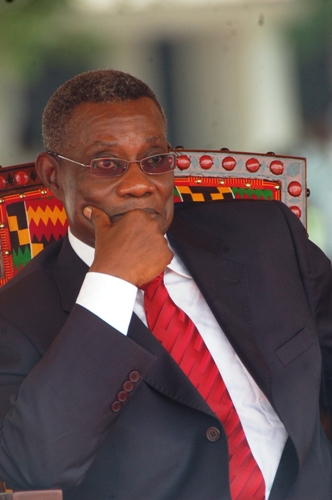 The President, Professor John Evans Atta Mills, has said the government is aware of the high expectations and anxiety of the electorate and is working hard to fix the economy in order to fulfil its electoral mandate.

He said contrary to the assertions of its political opponents that the issues confronting the well-being of the country had got out of its hand, â€œthe government is in full control of developments in the countryâ€.

President Mills said although the economy that the government inherited on its assumption of political power in January 2009 was severely challenged, several interventions had been taken to salvage it from a further slide and put it on an even keel to cushion the plight of the broad masses of the people.

Interacting with the presidential press corps at the Castle, Osu, on the occasion of his 65th birthday, President Mills said the government would not engage in any blame game with its opponents but concentrate all its efforts at fixing the economy to deal with the social problems of the people.

â€œWe are not interested in blame games; we want to solve the problems of Ghanaians. That was why we were elected,â€ he said.

He said the government shared in the concerns of the vast majority of the people whom he said were going through very trying circumstances to make ends meet and would do everything within its power to alleviate their suffering.

According to him, the government appreciated the real problems of the country, for which it had assembled competent people in various sectors of the economy to address those problems in order to bring lasting relief to the people.

President Mills noted that the countryâ€™s educational, transportation and health sectors needed major upgrading to address the current needs of the economy and the welfare of the masses of the people.

In addition, he said, people, especially graduates from the various educational institutions who were turned out in their thousands on an annual basis, were confronted with the problem of unemployment.

He said the lack of jobs had forced the youth, especially those in the northern regions of the country and elsewhere, to migrate to the capital and other major urban centres to seek for jobs.

President Mills said considering the ever rising needs and expectations of the electorate, in comparison to the budgetary constraints that had arisen as a result of the poor terms of trade, the global economic downturn and dwindled remittances, the government was faced with a difficult and arduous task to restructure the economy.

â€œThe good people of Ghana, majority of whom are resident in the rural communities, are looking up to the government to provide basic social services such as potable water, schools and clinics to improve their lot,â€ he said.

The President said Ghana was blessed with abundant natural resources and a standing corps of skilled workers whom the government would utilise to reconstruct the economy and provide material support for the people, especially the vulnerable and disadvantaged in society.

He implored the people to exercise restraint, since the government would neither shirk nor abandon its responsibility of transforming their conditions of life with the passage of time.