Accra, April 14, GNA – President John Evans Atta Mills on Monday gave his administration “high marks” on its performance in the first 100 days, saying the Government had achieved a lot of the things it set out to do. 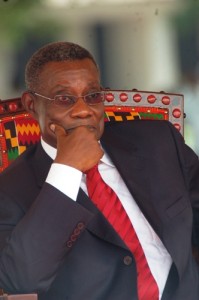 Speaking at a news conference at the Castle as part of activities marking the first 100 days of his government, which falls on Friday April 17 2009, he listed the pledges in the manifesto of the ruling National Democratic Congress (NDC), and said most of the things had largely been achieved.

The NDC promised a leaner government compared to that of the Former New Patriotic Party administration; respect for accountability and probity; cutting off of extravagance and profligacy; review of taxes and tariffs; inauguration of the Board of the National Council for Persons with Disability; tackling of the sanitation problem; composition of Boards and control of armed robbery.

“If you see what we have done, we’ve scored high marks,” he told the news conference, which was also attended by Ministers of State and party officials.

President Mills noted that while the first 100 days were regarded as honeymoon for governments, his did not enjoy a honeymoon. He said his government had only three days to prepare to over take power in the midst of very high public expectations and dismissed suggestions that he had been slow in government. He was declared President-Elect on Saturday January 3, 2009 and was sworn into office on Wednesday January 7 2009.

He said his administration was moving as fast as the Fourth Republican Constitution and other legal processes permitted it to do. President Mills stressed the need for a through approach to governance, devoid of taking hasty political decisions that the government might regret later, but said the records showed that his administration had moved rather fast.

President Mills said he did not want to repeat some of the mistakes that were made in the past.

“The people of this country will never forgive us if we do something adverse to the law,” the President said, adding that he would shield neither members of his government nor the previous administration that fell foul of the law.

President Mills drew attention to the fact that under the rule of law; there was the need to follow due process and that entailed time to collect facts and figures and to carry out thorough investigations. “It is not our intention to repeat the mistakes. Some people were asked to proceed on leave and they were on leave for eight years..Remember the allegations that were made against (members of the previous NDC government). They even went to my house saying I have stolen a car.”

President Mills said he had full confidence in his Ministers, adding that with time, their abilities would stand out for all to see. During question and answer time, President Mills repeated his statement in the State of the Nation Address to re-examine all high profile narcotic cases and deal with culprits according to the law. He said the assassination of Ya-Na Yakubu Andani II, Overlord of Dagbon, would be re-examined without any pre-conceived ideas, and that the criminal aspect would be separated from purely chieftaincy issues, stressing that there would be no peace in that area so far as the criminals walked free. 14 April 09