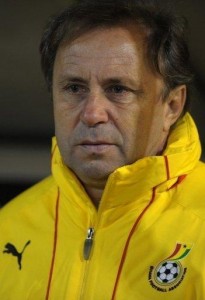 Milovan Rajevac is open to a shock return as Ghana coach after walking out on the Black Stars in September this year.

The Serbian opted for a new fat pay package as coach of Al-Ahli Jeddah in Saudi Arabia but has struggled to impress there while also struggling to cope with life generally in Saudi Arabia.

KickOffGhana.com has learnt Rajevac will be able to walk out on his existing deal in January 2011 and has told top Ghana Football Association officials he is open to a return.

Rajevac was in Dubai to see the Black Stars before their friendly game against Saudi Arabia but decided against watching the match in order not to attract undue attention and speculation.

The thought of Rajevac returning after turning down an improved offer from the Ghana Football Association is one that some influential football officials are also open to.

A source within the body said the coachâ€™s quality is still not in doubt and insists pragmatism and not pride should influence any decision if the issue of the Serbianâ€™s return becomes a major one.

Rajevac took Ghana to the final of the 2010 Nations Cup and the quarter finals of the 2010 World Cup before deciding he needed a new challenge.

In addition to struggling both on and off the field in Saudi Arabia, Rajevac has been dragged to the Court of Arbitration for Sport by his agent Goran Milovanovic who is demanding a million Euros in damages from him for signing for Ahli without his involvement.