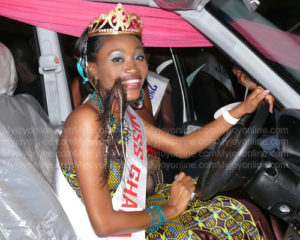 Twenty-year-old Miss Mimi Areme, an HND Marketing student of the Sunyani Polytechnic, was in the early hours of Sunday morning elected Miss Ghana 2009 at the grand finale of the national pageant at the Accra International Conference Centre.

Among several freebies for her prize, Mimi drove home a new Tata Safari 4X4 car, whose keys were handed her by the Minister of Tourism, Mrs Juliana Azumah-Mensah, moments after being decorated as Ghanaâ€™s 2009 beauty queen by 2008 winner, Miss Mawuse Appea.

For winning the ultimate, Mimi gets to represent Ghana in the Miss World Pageant. The car prize comes with a one-year servicing warranty from PHC Motors, plus she has a GHc200 monthly allowance for one year, 10 gallons of fuel per week for one year, four pieces of ATL fabric every month for one year and several other alluring indulgences.

Besides her poise and articulation, amplified by her beauty and regular smiles, Mimi was equally strong with her message, re-echoing US president Barack Obamaâ€™s challenge to Africaâ€™s youth to take their destinies into their own hands and dare themselves to overcome whatever challenges confront the continent. And her emphatic â€œYes we can!â€ admonishing resonated in the main auditorium as her many fans stood in brief applause.

Erica Maria Awini, a student of Psychology, Social Work and Religions at the University of Ghana emerged first runner-up and won for her prize a 32-inch Flat Screen Television, a set of furniture, prize money and three pieces of ATL fabric, while 23-year-old Ayishetu Dauda, a graduate of the University of Development Studies won Second runner-up. She also took home 29-inch Flat Screen Television, a portable fridge, a home theatre, prize money and a fabric from ATL.

In all 20 contestants (two from each region) were drawn into the grand finale, performing tasks in dressing, modeling, speaking, acting and answering questions from a panel of judges. There was a beach wear display, as well as evening gowns.

The event also turned out highly entertaining, with several of local hit artistes taking the stage to liven the night. They included the sexy Mzbel, the ever entertaining 4X4, VIP, the group RANA and Stephanie Benson, a Ghanaian based-in the UK. There was also a hilarious stand-up comedy by David Oscar.

Miss Ruweida Ibrahim, 21, a student of the Islamic University was adjudged Miss Talent and also the contestant with the most beautiful skin; 20-year-old Priscilla Asare also emerged as Miss Personality, while Alicia Osei Tutu, 22, was adjudged the contestant with the most beautiful hair. Twenty-two-year old Gifty Senam Gebu-Mensah of the All Nations University, Koforidua, won Miss Fitness, and she again, with 21-year-old UDS student, Sherifa Simdi Amadu were adjudged to have the most spectacular gowns.