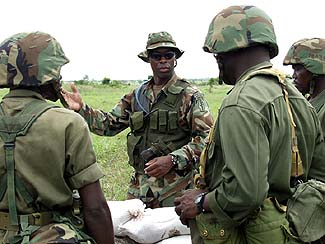 The lifeless remains of a Base Ordinance Depot (BOD) soldier, Cpl. Boamponsem Appiah aka ‘Koo Minini’ in an advanced stage of decomposition, has sent shockwaves in the countryâ€™s defence headquarters, with curious persons – soldiers and civilians – seeking clues to the mystery.

When the remains were spotted in a thicket near Home Touch, close to the main entrance to Burma Camp, many could not help but recall similar mysterious deaths involving service personnel a few years.

Expectedly, the mystery find is now a subject of frantic investigations by both the civilian Police and their military counterparts.

His family having lost touch with the breadwinner for some time, had its relief curtailed when it dawned on them that he was dead and in that horrible state.

When the Daily Guide spoke to the Director of the Ghana Armed Forces Public Relations Directorate, Col. E.W.K. Nibo, he confirmed the soldierâ€™s death but denied that he was beheaded.

Reports early on had suggested that the soldier was beheaded and his headless body dumped at the entrance to Burma Camp.

The family of the deceased has, according to Col. Nibo, identified the body as that of Cpl. Boamponsem Appiah, who had been declared missing.

The Police, Nibo said, are investigating the circumstances surrounding the mystery death of the soldier.

The military authorities nearly published his details as having abandoned his base, when on 21st September 2009 he was discovered, lifeless and in that pathetic state, leaving his colleagues in the Ordinance unit speechless.

The deceased soldier’s unit, BOD, deals with the custody and supply of critical military materials.

The Daily Guide said when it got in touch with the Cantonments District Police Commander, DSP Alex Komantani, he confirmed Boamponsemâ€™s death and added that the remains are lodged with the Police Hospital mortuary pending the availability of a pathologist to undertake an autopsy on the body.

Two years ago, the Daily Guide carried a story about the mysterious death of the bodyguard of the then Chief of Defence Staff, Lt. Gen. J.B. Danquah, in the bushes near the Recce Regiment.

When his body was discovered, a pistol lay by his side, prompting initial fears that he could have committed suicide.

When a pathologist is finally available to undertake a critical autopsy, the lid would have been removed from what for now remains another statistics of a mysterious death rocking the armed forces, including the shooting of a Naval officer, Sub-Lieutenant Alfred Kwabena Adjei at Nungua, a suburb of Accra.

The naval officer, until his untimely death on April 29, 2009, was pursuing a degree course at the Regional Maritime University at Nungua.