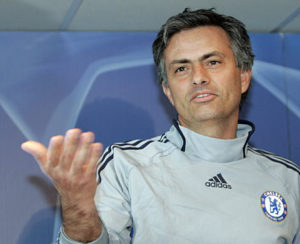 As the Black Stars prepare for the 2010 FIFA World Cup, speculations are rife that Inter Milan manager, Jose Mourinho, might join Ghana’s bench for the global showpiece in South Africa.

The Portuguese trainer, reliable sources have revealed, has agreed to assist Ghana’s team for a fee of $1 million, while a consortium of Ghanaian businessmen are said to have agreed to raise the amount to employ Mourinho’s services for the World Cup.

Hints of this have attracted mixed reactions from persons in authority who have chosen to remain silent over the matter.

But Mourinho’s interest in the Black Stars is not new. The Portuguese, who is admired in Ghana since his days with Chelsea of England, mentioned his desire to coach the Black Stars some day when he visited the country as part of an ambassadorial project sponsored by non-governmental organisation, Right to Play.

In the Friday, June 1, 2007, edition of Graphic Sports, the 47-year-old was reported as expressing an interest to coach the Black Stars after 2012 when his contract with Chelsea might have run out. But not long after his return to England that year, he was sacked as Chelsea manager as the club struggled in the early part of the season.

As an unrepentant admirer of Ghana’s midfield icon, Michael Essien, Mourinho was responsible for Essien’s move from Lyon in France to Chelsea, and when the trainer landed the Inter Milan job, Essien was among his targets in an effort to revamp the Italian side for an onslaught on European glory.

Essien remained with Chelsea, but Mourinho was successful with his bid for Essien’s compatriot, Suley Muntari. If his proposed job with the Stars materialises, it would be a happy reunion of old friends – he teaming up with Essien again.

It is yet to be seen how Ghana’s Serbian trainer, Milovan Rajevac, will react to the proposal when his own fairy tale experience with the Black Stars reaches a climax at the June 11 to July 11 World Cup in South Africa where glory and fame beckon.