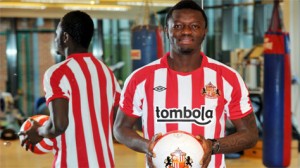 The former Portsmouth man is back in the UK with Sunderland after a trophy-laden hiatus at Internazionale, where he bagged a domestic and European treble last season.Muntariâ€™s spell at the San Siro heralded a boatload of trophies â€“ namely back-to-back Serie A titles, a Championsâ€™ League, Coppa Italia, FIFA Club World Cup and two Supercoppa Italianas.

Now the midfielder â€“ also an FA Cup winner with Pompey in 2008 â€“ has penned a loan deal at the Stadium of Light until the end of the season. Muntari, who spoke to international team-mates John Mensah and Asamoah Gyan before the move, was immediately struck by the atmosphere around the club upon his arrival.

â€œIt feels great to be at Sunderland and to be back in English football,â€ he said. â€œIâ€™m very happy and from what Iâ€™ve seen here itâ€™s going to be great. â€I spoke to the head coach first and also Asamoah and John â€“ they told me everything about the club. â€It is not strange to me. Everything here is amazing. The facilities and atmosphere are excellent.

â€œI only came a couple of days already but the atmosphere is great. Iâ€™m very pleased to be here. â€Last season was good for me, winning some trophies with Inter. We made history but now Iâ€™m here with Sunderland and doing well for the club is the uppermost thing in my mind.â€

After sweeping the board with Inter the Ghana international, who starred for his country at the 2010 FIFA World Cup, is looking forward to starting a new chapter of his career on Wearside. Muntari wonâ€™t play against Chelsea on Tuesday as he will now fly back to Italy to get his paperwork in order before returning to the North East ahead of Saturdayâ€™s trip to Stoke.

And he canâ€™t wait to get back into the thick of the action in a league he has grown to know and love. â€I love the pace, and passion the fans have across the nation,â€ said the midfielder. â€The people are passionate about the game and that makes it exciting. â€You see young kids at the stadiums watching the game. The English game makes me relaxed and happy so I can bring my skills out.

â€œI will just try to do my best to help Sunderland go further because they are doing well. I hope I can help the club go to Europe.â€He continued: â€œI have already met some of the guys, like Anton [Ferdinand] and [Kieran] Richardson. They are all down to earth and that is why we are doing well this season.
â€œI think there are not going to be any problems. I think we will do well.