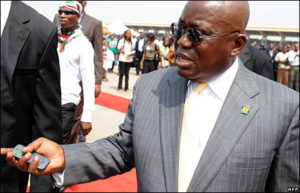 He said almost 20 months after the NDC led by Professor John Evan Atta Mills took office, little had been done to justify the Better Ghana promise he made to Ghanaians.

Nana Akufo Addo said the hardships Ghanaians were going through due to high increase in utility tariffs, was a clear indication that the government had failed.

The NPP flag bearer was addressing a rally at Kwabeng on Sunday to climax the party’s campaign activities towards the Atiwa by-election scheduled for Tuesday August 31.

The Atiwa by-election became necessary as a result of the death of its Member of Parliament (MP), Mr Kwasi Annoh Ankamah, a few weeks ago in London.

Nana Akufo-Addo, therefore, called on Ghanaians to show the NDC the exit come 2012, to pave way for the NPP to come and continue the good works it started.

He indicated that the only party that could change the fortunes of the country was the NPP considering its performance between 2001 and 2008.

Nana Akufo Addo said it was unfortunate that the National Health Insurance Scheme which was implemented by the NPP was no more functioning well.

The National Organizer of the NPP, Alhaji Moctar Bamba, on his part urged the electorate to vote massively for the NPP candidate, Mr Kwasi Amoako Attah, to continue the good work the late MP started.

He cautioned the NDC to desist from any acts that may mar the beauty of the election.

Mr Bamba said the NPP was ready to meet the NDC boot for boot in the upcoming by-election and beyond.

The rally attracted almost all the top hierarchy of the leading opposition party, including its General Secretary, Mr Owusu Afriyie, also known as ‘Sir John’.