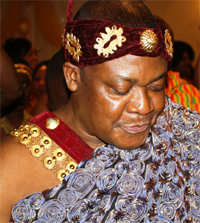 Nana Sarkodie Bandoh, former Asantefuohene of Toronto aka (Korosa) has passed away after a short illness in Toronto on Tuesday October 19, 2010 at Humber River Regional Hospital, Finch Site. He was 51 years old. He is survived by his wife and three children. Nana Bandoh was sworn in as Toronto Asantefuohene on October 6, 2006 for a three year term after which he stepped down in November 2009. Funeral arrangements will be announced later.

Stay tuned for more details and further developments of this sad event in Toronto, Canada.