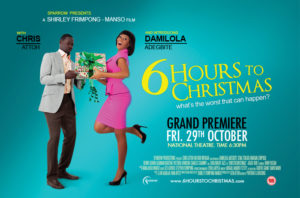 .In her latest production after giving birth, the Award winning Producer/Director brings Christmas to audiences very early this year and every bit of it is really worth it.
What was supposed to be a typical Christmas Eve for Creative Director Reggie and his fiancÃ© Akos takes a different turn when an office colleague he has been lusting after offers a gift impossible to refuse.
â€˜6 hours to Christmasâ€™ is a simple dark comedy of a would be office romance gone bad and is set around a small cast of seven (7).
After promising his fiancÃ© to be home for a special Christmas celebration and fire works earlier on in the day, Reggie played by Chris Attoh had other plans unknown to every one else, what he did not know was how those other plans were going to bring him the worst Christmas eve ever.

Saucy Pebbles played by new comer Damilola Adegbite invites Reggie home for his â€˜Christmas presentâ€™ and the events that unfolds in her apartment afterwards is what makes the whole movie bizarre and funny at the same time.

The chemistry between Chris and Damilola is perfect and the â€˜tinselâ€™ actress puts up a sterling performance in her first lead role combing humor and emotions and making the viewer feel sorry for the situation she found herself in.
The supporting cast of veteran actor Odoi Mensah and â€˜things we do for loveâ€™ alum Sena Tsikata, Mariam Lempogo who plays Chris Attohâ€™s girlfriendâ€™ makes â€˜6 hours to Christmasâ€™ a delight to watch.

Paparazzi:Eye In The Dark (Coming soon)