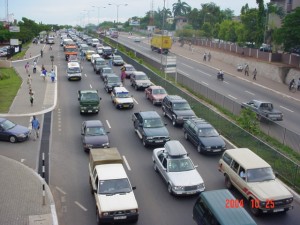 Mr. Mike Hammah, Minister of Transport on Monday said government would enact a new Road Traffic Regulation to replace the existing one by the end of the year.

He said the new regulation would prohibit the conversion of cargo carrying vehicles for passenger services in the country. Addressing the press in Accra, Mr Hammah expressed the hope that the measures as well as awareness creation programmes on road safety would reduce the spate of road accidents.

He said to ensure that vehicles plying the roads were safe; the Ministry of Transport had directed the Driver Vehicle and Licensing Authority (DVLA) to rigidly enforce and ensure that all cargo vehicles that were converted for passenger operations meet construction and use requirements.

Mr Hammah said a task force made up of representatives from the DVLA, Motor Transport and Traffic Unit of the Ghana Police Service and the National Road Safety Commission had been directed to undertake spot checks throughout the country to ensure that converted vehicles that did not meet the safety requirements were prohibited from plying the roads. He said available statistics indicated that about 90 per cent of road accidents were caused by human errors hence the need to find measures to curb all mechanical faults.

Mr Hammah noted that an eyewitness account at the scene of the recent accident on the Cape-Coast-Takoradi Highway in which 16 people lost their lives indicated that the rear axle of the one of the vehicles came off, which made the driver to lose control.