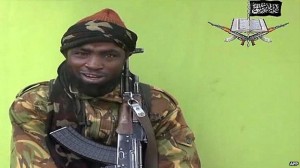 Nigeria is ready to talk to Islamist militants to negotiate the release of more than 200 abducted girls, cabinet minister Tanimu Turaki has said.

Boko Haram leader Abubakar Shekau said on Monday that captured girls who had not converted to Islam could be swapped for jailed fighters.

Mr Turaki said that if Shekau was sincere, he should send representatives for talks.

The girls were abducted last month from a boarding school in the north-east.

A video emerged on Monday showing about 130 of the girls wearing hijabs and reciting Koranic verses.

The governor of north-eastern Borno state, Kashim Shettima, says all those seen in the 27-minute footage have been identified as the abducted schoolgirls from Chibok Secondary School.

The girls’ families have said that most of those seized are Christians, although there are a number of Muslims among them.

Mr Turaki – who is special duties minister and chairman of a committee set up by President Goodluck Jonathan to find ways of reaching agreement with Boko Haram – said that Shekau should send people he trusted to meet the standing committee on reconciliation.

He told the BBC’s Focus on Africa programme that “dialogue is a key option” in bringing the crisis to an end and that “an issue of this nature can be resolved outside of violence”.

Correspondents say that the government appears to have changed its stance in relation to talks, because it initially suggested there would be no negotiations with Boko Haram.

Government information agency director Mike Omeri said late on Monday that the authorities would “use whatever kind of action” it took to free the girls, and that a military operation – with foreign help – was possible.

In efforts to confirm the identities of girls in the video, it was shown to some people in Chibok – the town where the girls were kidnapped – on Monday evening.

The chairman of the parents-teachers association at the school told the Reuters news agency that while seeing the video had “got parents apprehensive again”, the steps taken by the government and “the arrival of foreign troops” were boosting spirits.

But Dumoma Mpur said that so far she has not seen any government troops in Chibok. 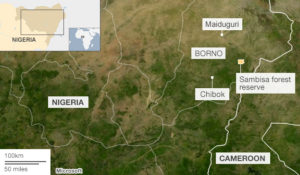 Meanwhile President Goodluck Jonathan has asked the National Assembly to extend for another six months the state of emergency in Borno – from where the girls were abducted – and two other north-eastern states.

In another development, the US has revealed it is flying manned surveillance missions over Nigeria to an effort to find the missing schoolgirls.

A team of about 30 US experts – members of the FBI and defence and state departments – is in Nigeria to help with the search. The UK, France and China also have teams on the ground in Nigeria and an Israeli counter-terrorism team is on its way.

Nigerian Chief of Defence Staff Alex Badeh welcomed such support and described the relationship between his country and the US as “mutual and strategic”.