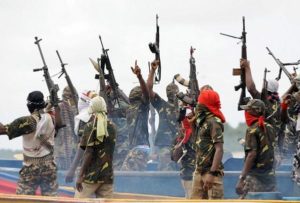 LAGOS (AFP) â€“ Pirates have demanded a one-and-half-million dollar ransom for two sailors they seized at the weekend off the coast of Cameroon but close to Nigeria, a Nigerian navy officer said on Tuesday.A Ghanaian captain and his Cameroonian engineer were attacked on Saturday off the restive Bakassi peninsula and taken from their vessel, Nigerian Navy spokesman commodore David Nabaida told AFP.The yet-unidentified pirates “have asked for a ransom of 1.5 million dollars (1.1 million euros),” said Nabaida, adding the seamen are being held in Abana. Abana, a major town in oil-rich Bakassi peninsula, was part of Nigeria before the territory was ceded to Cameroon.“MV Seagull was coming from Cameroon when it was attacked very close to Bakassi peninsula in the Cameroonian waters,” he said.“They (the pirates) didn’t find anything valuable to steal, so they took the captain and the engineer off the ship,” added Nabaida.The ship, which is believed to be used for general trading along the west coast of Africa, has been towed to Nigeria’s southern coastal city of Calabar, capital of Cross River State.Seven Chinese fishermen were this month freed by an armed gang in Cameroon’s southwest Bakassi region after a six-day hostage ordeal.Several groups, mostly armed, are active in the Bakassi peninsula, which was handed over to Cameroon by Nigeria in August 2008 under an international court settlement of a border dispute between Douala and Abuja.The International Maritime Bureau (IMB) identified Africa as a piracy hotspot following an increase in attacks in 2008, with Somali and Nigerian waters the most dangerous for seafarers.