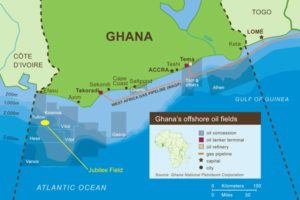 A Research Fellow at IMANI Ghana, Mr Bright Simons has expressed disappointment at the insidious way and manner in which the country’s oil resource is being managed.

He said the opaque clouds that have enveloped the processes relating to the management of the resource and the role government is playing should be of a major concern to all Ghanaians.

Mr Simons averred that if the government stops obfuscating its management of the process, I will mark government very high.

But what transparency does he want to see, to which he responds; Go to the GNPC website, go to the Ministry of Energy website and see for yourself whether as an independent observer you have any understanding whatsoever what the government’s policy on oil and gas is. My point (is) that government has to publish at least a paper (explaining) its decision to interfere with the process of Kosmos energy offloading its stake in the Jubilee fields to Exxonmobil.

He said the government was not running a private business and that if it is intending to invest huge public money in the oil industry, the people of Ghana deserved to know why and also contribute to that decision.

We have been told consistently that there are about 30 proposals that are being considered, put all of them on the internet, he charged.

If you take the four billion dollars that is being bandied around and if government is raising four billion dollars to invest in an enterprise, that will probably be the biggest single Ghanaian state sponsored venture we’ve seen, since the days of Valco and Akosombo Dam, don’t you think we have to contribute to (making the decision)?

Analyzing complex figures, the IMANI associate said there was the possibility that the stake the government was contemplating buying was over-valued and wondered why the government wanted to participate in a venture with a high risk.

Play the attached audio and listen to Bright Simons’ submissions.