The International Monetary Fund (IMF), has predicted that Ghana can generate a cumulative revenue of 20 billion US dollars from its oil and gas find over a production period of 18 years. 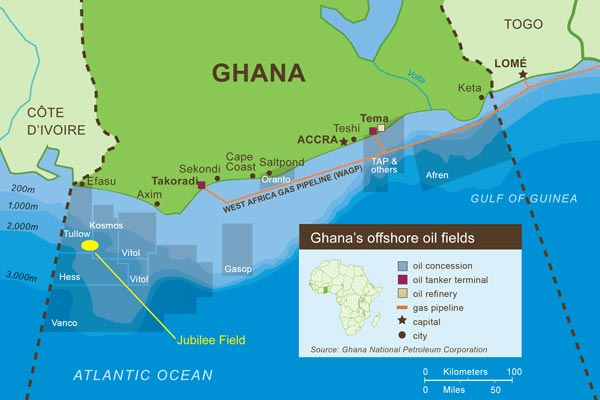 “The International Monetary Fund predicts government revenues from oil and gas could reach a cumulative $20 billion between 2012 and 2030 in the Jubilee field alone,” a statement issued jointly by the Integrated Social Development Centre (ISODEC) and Oxfam America said.

The statement signed by Ruby Kissiedu for the Co-odinator, Media and Campaigns of ISODEC has, therefore, commended President John Evans Atta Mills for his commitment to increase transparency and public participation in the oil sector.

It said the exploitation of national resources in Africa, has often led to increased poverty and conflict, a phenomenon often referred to as ”resource curse”,

The statement said President Mills could help Ghana to avoid corruption, underdevelopment, social conflict and environmental damage brought on by too many oil booms around the world.

It recalled President Mills’ recent announcement in which he promised accountability on the part of all public officials and asked Ghana’s development partners and non-government agencies to support governmentâ€™s efforts to build transparent and anti-corruption initiatives.

â€œThis is an important step to preserve Ghanaâ€™s record of good governance and stability by preparing Ghana to support accountable and efficient development of the oil industry and the billions in government revenue it will generate.â€

It said the two bodies were ready to work with the government to improve revenue generation especially by reviewing the mineralâ€™s fiscal regime to ensure that mining companies pay more than the current minimum of three per cent royalties and to monitor the Jubilee Oil Field and other oil projects to ensure a maximum oil recovery at minimum cost.

â€œWe are also ready to support government in the protection of the livelihoods of fisher folk and other communities around the Jubilee Oilfield as well as the larger marine ecological zone of the Gulf of Guinea,â€ it pledged .

The statement said the World Bank has committed 215 million US dollars in financing Kosmos Energy and Tullow Oil in support of the development of the Jubilee field.

It said, there was therefore the need for transparent revenue and payment practices, open and competitive contract bidding, active participation by civil society, and adequate legal and regulatory regime of the oil sector.
Source: The Ghanaian Times