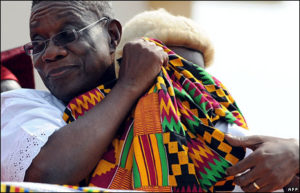 ItÂ´s a new day in Ghana. ItÂ´s a new dawn. ItÂ´s a new celebration. Ghanaians have at long last been freed from the tenterhooks of the NPP. All these would not have happened had it been the good foresight of my fellow Ghanaians who saw the need to change the direction of the country by the power of their thumb prints. Many Ghanaians have heaved a sign of relief and are bracing themselves for the real economic and social change that is coming.

As the NDC supporters celebrate, I would also urge them to take time to ponder over the country. The country is currently deeply divided, thanks largely to the NPP which used “We And Them” tactics to whip up ethnic sentiments. Which is why it was heart-warming to hear some wisdom talk which has been lacking in Ghana come from Professor Mills yesterday. He told a brief press conference that he would be president of all Ghanaians. This is one of the most sensible sentences we have not heard from our political arena for a long time.

Professor Mills who knows the pains of Ghanaians further went on to say that he would not embark on any political witch-hunt, something the NPP trumpeted over and over again during the campaigns. If sensible people rule, majority of the people tend to benefit. Therefore, I would urge Ghanaians with different political leanings or ideology to throw their weight behind Professor Mills so that he can steer Ghana towards success.

The President-Elect also debunked the idea that he was going to send people to jail. One other salient thing he said was assuring Ghanaians that he would not be sending workers home on indefinite leave as done by the NPP minutes after Kufour was sworn into office in 2000.

Ghana faces many new challenges as a result of the global economic meltdown. Therefore this is the best opportunity for Ghanaians to have somebody like Professor Mills to use his good brains to put the economy back on track. If Ghana is going to be successful we all need to play our part. With 2009 just around the corner, Ghanaians must resolve to work harder to lift this country up. The development and success of Ghana is the collective responsibility of all Ghanaians.

Before I sign off, I am again thanking all Ghanaians who voted and elected Professor Mills as the next President of the Republic of Ghana. What God has ordained would always surely come to pass. And what God has done let no man try to undo.

By the way do you know that for the first time in many years Ghanaians would be having a “Sitting President” and not a “Flying President”. Yes, Professor Mills would sit home often and strategize with his team to help solve the multiple problems confronting the country. The Fantes have this saying “Oba kyenkyima fo, onto ne na no fum” meaning a junketing child have no chance of burying his late mum. God richly bless you all as we celebrate with Professor Mills, his family, his team of campaign advisers, foot soldiers and the entire NDC party.