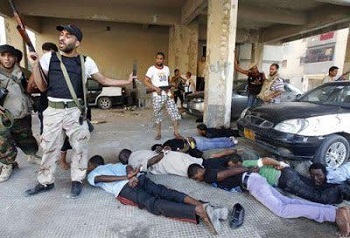 Patrick Osman, a Ghanaian national who is currently living in Libya reveals to Peacefmonline.com that the situation in the country is worse than images shown on television or reported on the radio by the international media.

According to him, he has witnessed over forty Ghanaians die at the hands of rebels.

Till date, the crisis in Libya comes in the context of wider unrest throughout the Middle East and North Africa.

“The scary part is that we would be at our hiding place and see the rebels bombing other people’s home. We can hardly tell who the rebels are targeting and where they plan to visit next. I can testify that about 42 Ghanaians have died at the hands of rebels,” he narrated.

Asked about how he feeds, Osman replied that they currently eat once a day because of the situation there.

“The shops don’t often open and it makes it hard for us to have food to eat. We eat once a day,” he added.

The chaotic atmosphere gives the vulnerable survivors no chance to leave Libya to a safer place.

Patrick Osman, spoke with a docile tone and wondered why the government of Ghana had abandoned them to die in the cold whiles other countries were airlifting their nationals back home.

“The situation here is worse and we want to return home. There is no flight here for us to board and getting to the street is even a difficult thing to do. We have no idea whether the Ghana Embassy is still operating here,” he cried.