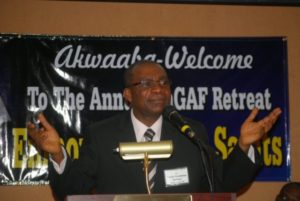 The Pacific Ghanaian Adventist Fellowship, PAGAF, the umbrella body coordinating the activities of Ghanaian Adventist fellowships along the Pacific coast of America has held its second annual retreat in Arizona. The Retreat which had as its theme “Empowering The Saints” had about 300 delegates from the states of Oregon, California, Texas, Colorado and Tennessee attending . Also present as guests were Pastors Kwasi Sarpong, Amofah A. Asamoah and Eld Osei Agyena , President, Secretary and Treasurer respectfully of the North American Ghanaian Adventist organization secretariat. Also present were Pastor Dr. I. B. Boateng of the Columbus Ohio Ghanian church as well as Pastor Dr. Emmanuel Osei of the First Ghana New York Church. Pastor Dr. Kwabena Donkor, of the biblical research department of the General Conference of SDA, Washington DC, was the guest speaker.

Preaching a series of sermons which all focused on how Christians today can become empowered by God, he reminded delegates that to become empowered by God is a process and not a one moment miraculous event. “One does not all of a sudden become empowered by God. It is a process that develops after a close fellowship with God. All the examples of people who were empowered by God in the bible were God fearing people who walked with God. They were God’s friends and spoke and heard God when he spoke” He said. Using the book of Acts, chapter 10, Pastor Donkor recounted how God revealed unto Peter the need to preach the gospel to all people of all nations through a vision. When God empowers you He gives you a mission to empower others in Him”. He said. “God had prepared the heart of Cornelius to receive His message through Peter, As a delegate at this retreat hoping to be empowered by God prepare to reach out to everyone about your experiences with God” He said.

The retreat which gave delegates the opportunity to ractify the associations constitution also had its first elected officials elected. At a business meeting the then interim President Dr. Alex Clerk commended the interim executives whose term was ending and recounted some modest achievements the fellowship had made. The following were voted on and accepted to lead the fellowship until 2012

Daniel Amoako was elected Associate Secretary whilst the treasurer elected was Kofi Antobam, with Akosua Oppong- Mensah as the associate treasurer. Patrick Oppong-Boateng and Rita Abankwah were elected as the youth representatives whilstÂ Pastor Yaw Bauhin was elected as the ministerial secretary.

In another development, Dr Paul Yeboah, one of the instruments the Lord has used in developing and nurturing Ghanaian Adventist churches throughout Europe and North America was honoured by the fellowship. With glowing tributes from family and friends, Dr Yeboah was presented with a plaque and has had a foundation named after him.

The Dr Yeboah foundation was been set up to continue the work of God in the Diaspora as exemplified by Dr Yeboah.

Responding to the honor done to him, Dr Yeboah thanked the delegates and proclaimed that if God could use him, a village boy to spread His message throughout the Ghanaian Diaspora then each one present had a mission to undertake for God.