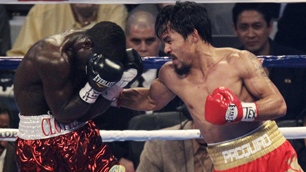 Fighting on the star, Manny Pacquiao showed once again why he is the star.With the biggest fight crowd in the U.S. in 17 years cheering him on at Cowboys Stadium, Pacquiao dominated a strangely passive Joshua Clottey from the opening bell Saturday night to retain his welterweight title and cement his status as the best pound-for-pound fighter in the world.The fight wasn’t close, and it was never in doubt. It was so one-sided that even those in the cheap seats among the crowd of 50,994 could tell without looking at the giant video screens over the ring that Pacquiao was in total command.One ringside judge gave Pacquiao every round, while the two others gave him all but one. The Associated Press scored it a shutout for the Filipino sensation.It wasn’t as flashy as his knockout of Ricky Hatton or as savage as the beating he gave Oscar De La Hoya, but there was no doubt Pacquiao was in command the entire way against a fighter who kept his gloves up high in front of his face and chose to engage him only in spurts. Clottey’s strategy worked to keep him upright, but he was never competitive in the biggest fight of his career.“He’s a very tough opponent,” Pacquiao said. “He was looking for a big shot.”Pacquiao was supposed to have been fighting Floyd Mayweather Jr. instead of Clottey, but the megafight fell apart over a dispute over blood testing. He took out any frustrations over losing the biggest fight of his career by beating up Clottey on the biggest stage of his career.“I want that fight, the world wants that fight, but it’s up to him,” Pacquiao said. “I’m ready to fight any time.”That time won’t come soon. Mayweather is fighting Shane Mosley on May 1, and the earliest the two could get together would be in the fall and only if Mayweather backs off his demands for blood testing.The fight this night was more of an event than a real competition, bringing in the biggest crowd in the U.S. for a fight since Julio Cesar Chavez fought Pernell Whitaker at the Alamodome in 1993. It paid off handsomely for Pacquiao, though, who earned at least $12 million and built on the reputation he has gained as one of the greatest fighters of his time.Promoters not only sold out the 45,000 seats available for the bout, but added thousands more standing room only “party passes” for fans who could get a glimpse of the action and see every drop of sweat on the huge overhead screens.“It’s one of the most incredible stories not just in boxing but anywhere,” promoter Bob Arum said. “Fourteen years ago he was sleeping in a cardboard shack in the Philippines and tonight he puts 51,000 people in this palace in Dallas.”The tone of the fight was set early, with Pacquiao advancing against his taller opponent and throwing punches with both hands from all angles. It was the same style that gave him spectacular wins in his last three fights and, though Clottey was clearly the bigger fighter, he fought back only sparingly.“Everything’s working now,” trainer Freddie Roach told Pacquiao after the third round. “It’s easy.”Clottey seemed content to hold his hands high in a peek-a-boo style through much of the early rounds, trying to pick off Pacquiao’s punches and perhaps rally late. But he gave away round after round, despite landing some clean punches on the rare occasions when he would throw a combination.“You gotta take a chance,” Clottey’s trainer, Lenny DeJesus, implored him after the sixth round. “You’re in a fight and you gotta start taking chances.”Clottey didn’t, though, and his prize was that he was the first fighter in Pacquiao’s last six fights to make it to the final bell. The only suspense when it came time to announce the decision was whether the three ringside judges would give Clottey any of the rounds.“He has speed, I lost the fight,” Clottey said. “He’s fast, that’s why I was taking my time.”Pacquiao threw three times as many punches as Clottey, an average of 100 a round, and landed as many power shots as Clottey threw. Final punch stats showed Pacquiao landing 246 of 1,231 punches to 108 of 399 for Clottey.Clottey had gotten the fight off a good performance in his last bout against Miguel Cotto, but he was clearly more concerned with surviving the all out assault that Pacquiao is noted for than winning the fight.“Joshua Clottey had the power to knock him out but was reluctant to punch,” DeJesus said. “We clearly got beat. I don’t think he won a round.”Roach agreed, saying he saw nothing in Clottey to win.“He had a good defense, but defense isn’t enough to win a fight,” Roach said.