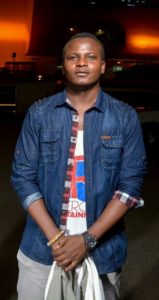 I had a one-on-one chat with Ghana-based blogger Isaac Nana Yaw Annor, who is the founder of Bygone Gh. He was born on 28 May, 1992. He’s 24 years old. He attended Pank Senior High School in Awoshie-Alang, a suburb in the Greater Accra region of Ghana. Moreover, he’s the publicist of Abeiku Santana, a renowned Ghanaian radio presenter at Okay FM and an entrepeneur.

Some of the things we chatted about were about how his blogging career started and what his views are about the Ghana movie, music and blogging industries.

Phyllis Ntim: When was Bygone Gh established?
Isaac: Bygone Gh was established as a WordPress blog in 2011 and later became an official blog in May 2016.

Phyllis Ntim: What were the challenges you initially faced in your blogging career?
Isaac: The challenge is that most people are really focused on big media websites like Ghana Web of which I have to force and push content to different groups before getting or hitting my view target in a day.

Phyllis Ntim: For which celebrities have you worked for in the past?
Isaac: Well, I’ve been working with a lot of upcoming artistes. Although they are not yet there, I’m hoping with what they do and with their determination, that they will get there. Firstly, I worked with Macho Rapper and I’m still working with him. It’s just that he’s working on other projects for now. I’m currently working with ChoirMaster.

Phyllis Ntim: You’re Abeiku Santana’s publicist. How is it like working with him?
Isaac: To be honest with you, Abeiku Santana has been one of the blessings in my life. I’ll never stand somewhere and say something bad about him. He is always on point. It’s great, beautiful and fun working with him.

Phyllis Ntim: How is the blogging industry like in Ghana?
Isaac: For now, I think there are a lot of challenges because almost everyone is a blogger in Ghana. Due to that, young bloggers are not being recognized and a lot of fake news come in the system. But the industry is gradually getting well.

Phyllis Ntim: Why do you think that some celebrities disrespect bloggers?
Isaac: I think they feel that they are too big. Most think our work are not worth it.

Phyllis Ntim: What do you think of the current Ghana music and film scenes?
Isaac: I think the movie industry is kind of moving forward one way or the other unlike the music industry. It isn’t growing at all. Those with money are not supporting a lot of talented music acts.

Phyllis Ntim: What changes would you like to see in those industries?
Isaac: I think there should be a change of president in MUSIGA. The current one is not helping at all and almost all the musicians are complaining about it. I would like to see the government invest a lot in both the music and and movie industries.

Phyllis Ntim: Who do you look up to?
Isaac: Well, firstly, I look up to God. I also look up to Abeiku Santana, Dr. Pounds, OB Jerry, Monte Oz, Phyllis (You), Swag of Africa and Ameyaw, a lot of people. Their lifestyle motivates me one way or the other.

Phyllis Ntim: What advice would you give to those who want to make it in the Ghana blogging industry?
Isaac: I’ll advice everyone to focus on the mission and work hard. It’s not that easy, but with determination, God will get you there.