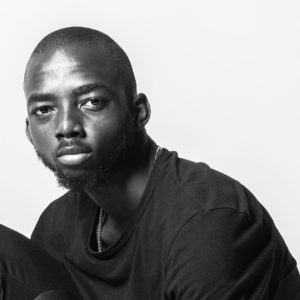 Joseph Awuah-Darko, popularly known as Okuntakinte, is Ghana’s first Afro EDM musician. EDM is the acronym for Electronic Dance Music. It is a broad range of percussive electronic music genres. It serves as an umbrella term for several commercially-popular genres such as techno, house, trance, drum and bass, dubstep and trap. Afro EDM is a sub-genre of EDM. His music video, Melanin Girls, which went viral on social media, was released on 29 January, 2016.

The #melaningirls campaign trended on social media for four days. Dark-skinned girls could post their photos online with the hashtag #melaningirls and stood a chance to win 1000 ghana cedis.

This is believed to have ended up as Ghana’s most engaging social media campaign so far and even caught the attention of BBC World Service presenter Nuala McGovern, who interviewed Økuntakinte on BBC Outside Source. Not only is the song sending an anti-bleaching message but it also talks about his past relationships with dark-skinned girls.

I had a one-on-one interview with Okuntakinte and he spoke about a lot of things such as how his music journey started, who his rolemodels are in music and who his favourite EDM artistes are.

The 19-year-old musician was born in Middlesex, England. He moved to Ghana at the age of five. He attended Ghana International School. He is a first year Liberal Arts & Business Management student at Ashesi University, Ghana.

When I asked him how his journey started in music, he said: “I knew I could sing when I was about 14 years old. In 2007, when ex-president W. Bush came to Ghana, I was asked by my former school to sing the National Anthem for him. I featured in a musical and I won an award for Most Versatile Actor at the Ghana National Theater in 2009. I took the music seriously about seven months ago.”

He elaborated on how he came up with the name Økuntakinte. “I chose the name Økuntakinte because I watched Roots at some point in my life. I was really inspired by Kunta Kinte’s non-conformism and his rebellious demeanor towards his white oppressors and I really wanted my brand to embody that unconventional non-conformism and just to make it more authentic,” he stated. I asked him why he added the letter ‘Ø’ to ‘Kuntakinte’ and he said: “It just glowed in my mind. When I mentioned the name, it just glowed in my mind.”

He is signed to Meister Music and his manager, Meister, also manages popular Nigerian artiste Mr. Eazi. “Meister was following me on Instagram before we met. I used to do abstract arts. He followed me mainly because of the artworks. One day, I reached out to him, after he came to one of my videoshoots unawares. We met for the first time. I asked him if there was any way he could assist me in moving forward in the music industry. I didn’t know he was Mr. Eazi’s manager at the time. When I found that out, it was just a coincidence that he passed by the videoshoot. I didn’t know who he was at the time. We had a mutual agreement that it would be best if he manages me. He was following my artworks but he had no idea I was into music,” Økuntakinte said.

Moreover, I asked him what his song ‘Melanin Girls’ is about. “Melanin is the pigment that gives human skin, hair, and eyes their color. The more melanin you have in your skin, the darker the skin becomes. The song Melanin Girls is like a paradox. I’m celebrating dark-skinned girls and it’s like a call-to-action to embrace your beauty. It’s sort of an anti-bleaching campaign. It’s also a song based on some of my personal experiences. I have an affinity for dark-skinned girls. The girls I dated in the past are all dark-skinned. I was also talking about how I had unsuccessful relationships with those individuals in the past. It tells a story about how I’ve been betrayed by dark-skinned girls in the past but that they should still embrace their beauty.”

He was inspired by the works of Angélique Kidjo, Amy Winehouse, Fela Kuti and B.B. King. “I grew up listening to different types of music. All my life, I’ve been listening to soul and jazz music because of how they are melancholic in nature. Amy Winehouse and Fela Kuti had different demographic backgrounds. Concerning the differences that each of them had, whether personal or political, the tone of their voices and sort of calculated nonchalance in the way they expressed themselves really inspired me. They had a huge impact on how I sing, the way I sing and why I sing what I sing.”

When I asked what his plans are for this year, he said: “I’m working on an EP entitled Okunta Season. It’s gonna be released in the summer. I’m working on the contents at the moment and collaborating with artistes like M.anifest, Efya and Mr. Eazi. I hope to get a distribution deal from a company which is based in South Africa. I’m really excited about that. I’m just looking forward to growing as an artiste, improve my voice, craft and have a very good academic year in the uni because it’s difficult to strike a balance between music and education.”