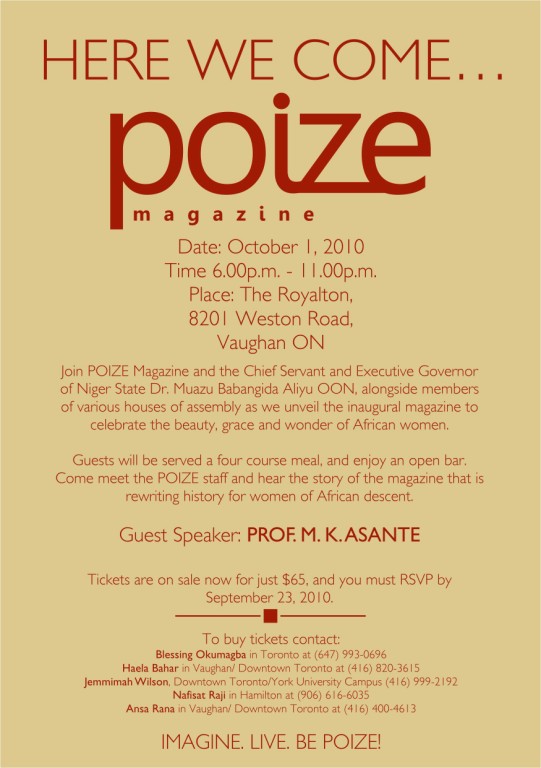 POIZE Magazine is having their launch party on Oct. 1 in Toronto, Canada.
The event promises to be spectacular with food, fun and fantastic women
and men celebrating the history, legacy and future of women of African descent.

About the Founder
Born in Niger State, Nigeria. Comfort Sakoma migrated to Canada as a youth and attended the University of Toronto where, she studied Political Science, and African studies.
Comfortâ€™s inspiration to create Poize Magazine came when she realized that ambitious African women, like herself did not have a place where they could read about the accomplishments of other Inspirational African people. How could African women believe that they could be successful if there was no evidence that African women were? As a strong proponent of the theory, “if you make an observation you have an obligationâ€™, Comfort immediately began to construct what has been introduced to the world as Poize Magazine.

Our Mission
Poize Magazine is a trans-generational movement that is stirring up the hearts of women, both young and old, from across the African continent and the world to build self- esteem, relate positive media images. profile successful women of African decent, and motivate the next generation of African Leaders from all socio- economic backgrounds.

1. Age21-65
2. Varied socio- economic. Religious and educational backgrounds
3. African women, who represent the largest buying power in the world
4. Men that understand, respect, and celebrate the women In their lives
5. Women who span across various career paths
6, Women in Africa and the Diaspora
7. Women who have established families. i.e…husband and child (ran)
8. Women Interested in their spiritual, physical. Financial and emotional well being
9. Ambitious women who are determined to achieve success
10. Women who are unaware of their potential, and looking for a source of inspiration

Features
The people we will feature in our magazine are both women and men who are working to make Africa a better place for all of its citizens. These people include;

We have an expected circulation of 30,000 copies per issue, which we anticipate will grow to 50,000