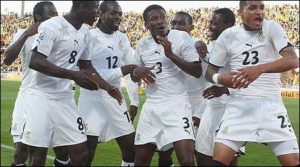 Ghana’s World Cup dream hangs in the balance after a dire draw with 10-man Australia.

Rajevic’s team will still qualify for the knockout stages if they avoid defeat against Germany on Wednesday.

But they barely deserve to have that final crack at redemption after one of their most embarrassing displays of the modern era.

Australia took an early lead againt the Black Stars as the curse of the Jabulani struck for Richard Kingson.

The Wigan stopper spilt Mark Bresciano’s dead-ball and Brett Holman fired home. At that stage Australia looked good value to kick on but saw their bid derailed when Harry Kewell handled in the box.

Kewell was sent off and Asamoah Gyan slammed home from the spot.

Ten-man Australia picked themselves up and gave it a good shot. But both sides missed a host of chances as it ended all-square in Rustenburg

It could have been so different for the Aussies after they took the lead with just 11 minutes on the clock.

Bresciano popped a 25-yard free-kick into the box â€” and Kingson looked on in horror as he spilt it straight to Holman.

And the midfield man made no mistake and cannoned the loose ball into the top corner.

That left Ghana firmly on the back foot but Rahim Ayew and Gyan both came close as they looked to hit back.

And with 25 minutes gone, the Black Stars were level â€” and facing just ten men. Anthony Annan smacked a shot towards goal that Kewell, on the line, blocked with his arm.

It was a simple decision for ref Roberto Rosetti, who sent the former Liverpool man for an early bath before Gyan fired home.

Kevin-Prince Boateng then had the chance to cap a breakneck first half by putting Ghana ahead.

But Mark Shwarzer kept matters level after Boateng’s muscular run and shot. The Black stars stormed out of the blocks after the break and peppered the Aussie goal with long-rangers.

Kwadwo Asamoah and Gyan tried their luck from distance but Schwarzer was up to the task.

Just before the hour, Australia had a sniff of their own when Craig Moore nodded Luke Wilkshire’s corner over the bar.

And they had a golden chance soon after through Scott Chipperfield â€” who had been on the pitch for only a MINUTE.
The FC Basel man raced into the box and, unmarked and just ten yards out, spooned his header over.
Ghana refused to take it lying down and a devilish cross from Gyan just evaded Asamoah.
Gyan was at the heart of the Black Stars’ play and walloped a shot just wide after Boateng’s cute pass.
Both sides were throwing everything at this now and Wilkshire wasted an incredible chance at the other end.
The Dynamo Moscow star shot straight at keeper Kingson with no one else in sight.
Ghana almost snatched it at the end but Jonathan Mensah fired his header over.