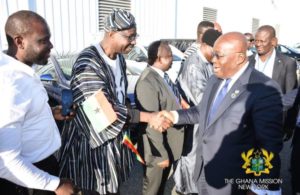 He is being accompanied by other top government officials, including Nana Asante Bediatuo, Secretary to the President and Ambassador Ahmed Hassan, Director of State Protocol.

Immediately his aircraft touched down at the Teterboro Airport in New Jersey, he was welcomed aboard by Ghana’s Permanent Representative to the United Nations, Ambassador Martha Pobee and the Military Advisor to the Ghana Mission, Brig. Gen Reginald Odoi. 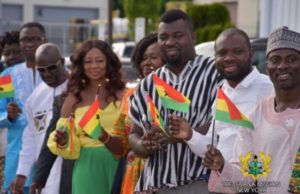 He then went on to greet a cross section of Ghanaians and executives of the New Patriotic Party in the United States of America, who had lined up waving miniature Ghana flags.

The Ghanaian Leader was then driven to his hotel, where six- year old Magdalene Smart-Abbey presented a bouquet of flowers to him. Ambassador Martha Pobee then introduced Home-based officers of the Ghana Mission to the President. 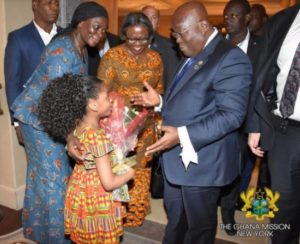 During his four-day stay in New York , the President will attend the World Oceans Day events and make a statement at the plenary meeting of the Oceans Conference at the UN General Assembly.

He will hold a number of bilateral meeting with top UN officers, including the Deputy United Nations Secretary General, Ms Amina Mohamed and Mr.Peter Thomson, President of the UN General Assembly.

Top on the President’s agenda will also be an interaction with the Ghanaian community.