President John Evans Fiifi Atta Mills has lent further credence to the â€˜blood is thicker than waterâ€™ adage when he appointed his blood brother as one of his special advisors. 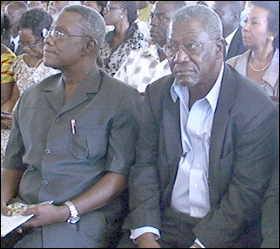 A statement signed by the Presidential Spokesperson, Mahama Ayariga, named Dr. Cadman Atta Mills as a member of a 10-man Economic Advisory Council (EAC), constituted to advise the President on key economic issues affecting the country.

â€œThis is to help manage the impact of the international and domestic economic crisis affecting the country in the wake of the global economic crunch,â€ it said.

According to the statement, the committee would liaise with existing institutions to formulate key economic policies for the country.

It is not clear how political observers will take this development, especially in the face of the fact that the ruling National Democratic Congress (NDC) vehemently criticized former President John Agyekum Kufuor for appointing his brother, Dr. Kwame Addo Kufuor, as Defence Minister.

Dr. Cadman Atta Mills was formerly with the United Nations (UN) and the World Bank.

He married Maimouna Mills in Dakar, Senegal- a union that was blessed with one issue.

Somewhere along the line, Cadman filed for divorce and Mrs. Mills also filed a counterclaim- a development that led to a looming legal tussle. But prior to the historic trial, the parties reached a settlement agreement and placed the terms of the agreement on record.

They agreed to split Cadmanâ€™s retirement account with the World Bank and also his thrift savings accounts so that each party would get 50%.

In August 2004, the court entered a judgment of absolute divorce, granting the divorce and incorporating the partiesâ€™ settlement agreement.

The judgment also reserved jurisdiction to receive, amend, alter, amend and/or alter any qualified pension orders which might be necessary to carry out the terms and provisions of the partiesâ€™ agreement.

Following the entry of judgment, Mrs. Mills drafted an order for the division of Cadman Millsâ€™ pension benefits with the World Bank. This, he refused to do and another motion hearing was held, following which the parties made a modification of the previously submitted but un-executed order, leading to an agreement to change Mrs. Millsâ€™ share to 41%. The agreement was then placed on record.