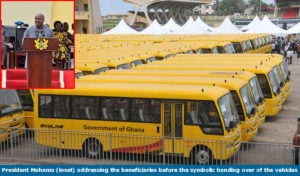 The vehicles, made up of Nissan Navara Pick-ups, Mahindra Pick-ups and 66-seater buses were presented to colleges of education, polytechnics and technical universities and special schools.

The other beneficiaries are public and selected private universities, senior high schools, and technical and vocational institutes.

Addressing the beneficiaries before the symbolic handing over of the vehicles, President Mahama said the presentation formed part of his resolve to empower the institutions to perform their duties creditably.

“This will also subsequently help in ensuring quality education at all levels and geographical locations,” he said.

President Mahama explained that although many schools applied for the vehicles, government had to adopt criteria that would ensure that beneficiaries were actually in need of them.

He said schools with high enrollment but never benefited from the previous allocations and those in remote areas of the country were paramount in their considerations.

The President said deprived and needy schools; new community day senior high schools and other schools that had no vehicles were also beneficiaries of the current distribution.

He added that his administration had decided to put on hold the establishment of new colleges of education because the Government was supporting and absorbing the private ones into the public sector. The President said apart from that the Government was also expanding facilities in the existing public ones to increase enrollment.

President Mahama said new district assemblies that did not receive the first consignment of vehicles would also receive theirs from the current package. He suggested that drivers in educational institutions should be brought to Accra and trained in defensive driving in order to provide adequate protection to students during operations at their various locations.

Professor Jane Naana Opoku-Agyemang, the Minister of Education, said the provision of the vehicles would enhance quality education as the staff and management of the institutions would be mobile to carry out their duties.

She called on the beneficiary institutions to ensure that the vehicles were constantly maintained to prolong their lifespan. Prof. Opoku-Agyeman appealed to the metropolitan, municipal and district assemblies to support institutions in terms of maintenance and other logistics.