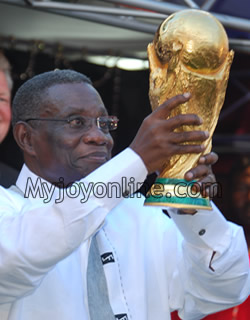 President J.E.A Mills on Saturday expressed great faith in the ability of the Black Stars to outperform all competition at South Africa 2010, and urged the team to win the World Cup.

President Mills hosted the team and officials to a pre-World Cup luncheon at the Castle and told the team; “I’m happy, and it is both a privilege and honour to host you. We believe with your calibre, you’ll play and win and bring the cup to Ghana.”

The Black Stars depart Accra for final preparations in friendlies in France, the Netherlands and England before heading to South Africa for the World Cup.

Said the president: “I assure you that I’m behind you, the Government of Ghana and the people of Ghana are solidly behind you,” amidst promises that the Sports Ministry and other stakeholders have agreed on a very attractive package for the team.

“We’ll bring the cup because God is on our side,” President Mills said.

President Mills is expected to watch the opening World Cup game between hosts South Africa and Mexico on June 11.

He advised the players to play by the rules, avoid being provoked and to avoid actions that would attract red and yellow cards to reduce their numbers on the field of play, explaining that numbers are very important in football, and playing by the rules till the final whistle is the mark of a true sportsman.

Black Stars spokesperson, John Paintsil donated the jersey he wore for Fulham to play in the European Championship League to the President, and assured the nation that they would play excellently to prove to the world that they deserved to be at the World Cup.

Mr Kwesi Nyantakyi, President of the Ghana Football Association expressed appreciation to President Mills for his words and acts of encouragement.

He also presented a copy of a book launched by coach Sellas Tetteh, the 2009 Junior World Cup winning African coach to President Mills.

Ms Akua Sena Dansua, Minister of Youth and Sports said: “We assure the nation that the boys will do better than they did in Germany 2006.”

Story by Myjoyonline.com/Ghana
With additional finals from GNA