London, May 6, GNA – Britain on Wednesday applauded Ghana for her good democratic credentials and for making further efforts to improve the lives of the people. 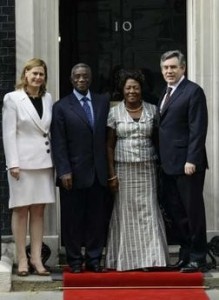 The Queen of England, Queen Elizabeth II, welcoming President John Evans Atta Mills to London, at the start of three-day state visit to Britain, commended Ghana on for peaceful and orderly conduct of the last general elections, observing that, Ghana had become a beacon of democracy for other African countries.

“We are happy at the peace and order of your country’s last elections, and I wish to congratulate you on your election to the highest political office of your country,” Lord Brett, a representative of the Queen said as he welcomed the President on behalf of the Queen. According to Lord Brett, Her Majesty the Queen was proud that Ghana, a key member of the Commonwealth, was leading the way in broadening the frontiers of democracy and wished the President a fruitful stay in London.

He also commended President Mills for his commitment to fighting corruption and the drug menace.

President Mills thanked the Queen for the invitation and pledged to continue to lead Ghana on the path of championing democracy. “Considering how far we have come, there is no turning back and Ghana will invest in her democracy,” the President said. President Mills said it was not for nothing that he accepted the invitation to pay an official visit to London, considering the strong ties between Ghana and Britain.

“The close relationship between Ghana and Britain is common knowledge and I am here to strengthen our relationship”. On the issue of drugs, the President said he was not happy about Ghana becoming a major transit point for the illicit drug trade and will therefore make sure his Government tackled the menace. “I allowed myself and all my officials to go through all the necessary checks before emplaning and so if as President I am prepared to submit myself to the necessary checks, it tells you the extent to which I am committed to stamping out the illicit drug trade in Ghana,” the President said.

“I am committed to really making Ghana less attractive to the drug barons and my commitment goes beyond words”, he said and thanked the British Government for its assistance through “Operation Westbridge”, which is supporting the Ghana Government to fight the illicit drug trade.

President Mills, who arrived in London Wednesday morning, will meet the Foreign Secretary, the Home Secretary, other officials, and meet the Prime Minister, Mr. Gordon Brown at 10 Downing Street. 6 May 09
Source:
GNA