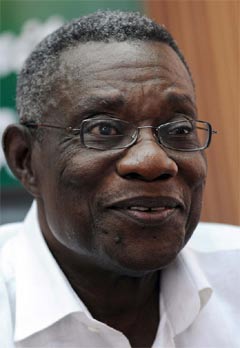 A former Spokesperson to former President John Agyekum Kufuor, Kwabena Agyepong, says President Mills has failed to attend some critical international assignments outside the country because he is physically not strong enough to embark on such trips.Kwabena Agyepong told Citi Breakfast Show host Moro Awudu, on Thursday, March 25 that the Vice President had to step in for him and attend several important occasions such as the AU summit because the presidentâ€™s health could not support him to undergo the strenuous activities involved in such trips.â€œHow many times has John Mahama been out? A lot of times…Mills canâ€™t do it because he is physically not able to do it and thatâ€™s why even important occasions like Africa Union the Vice President had to go…He canâ€™t do the strenuous work that Kufuor had to doâ€ The Presidentâ€™s health has been a major source of concern to many since the electioneering campaign in 2008.It is recalled that shortly after his nomination as the NDCâ€™s flagbearer for the 2008 elections, NDCâ€™s MP for Lower Manya Krobo, Hon. Teye Nyaunu called for the replacement of then candidate Mills because he thought he was not fit enough to run the race.At the time of his campaign, the NDC slammed former President Kufuor for embarking on numerous travels while neglecting his duties at home.Kwabena Agyepong chided the NDC for what he called the hypocritical stance on the matter.He suggested that President Millsâ€™ inability to travel is not because he wants to keep to a campaign promise of cutting down presidential travels to save cost but rather he is too frail to meet the energy demands of such trips.â€œThere is no shame about that (that president Mills is sick) we donâ€™t wish ill for anybody…as we speak President Mubarak is undergoing treatment in Saudi Arabia, he is sick. Reagan underwent several operations, why are we being so fetish about the issue?He alleged that President Mills is benefiting from some state largesse including a parcel of state land at Amasaman.â€œProfessor Mills cannot tell me that he has not benefited from State largesse by having a plot. The plot at Amasaman, thatâ€™s where he is building his house. You should go and ask him whether that is not a state property.â€ He saidâ€œToday he can look into the eyes of Ghanaians and said that Muntaka is not the only person to have travelled with the girlfriend. The man who is God fearing is now accepting the fact that Ministers can have extra marital activities.â€â€œAma Benyiwa Doe and the rest, according to reports in the papers are building mansions within one year. They should not pretend that they are saints and then damage people just to get into office and do worse.â€ He added.Meanwhile, the Communications Director to the presidency, Koku Anyidoho, responding to Mr. Agyepong’s claims dismissed the assertion that the President is unable to travel because he is unfit.He told Citi FM’s Patrick Ayumu that Mr. Agyepong’s claims are unjustified.“The President was in Abuja. Last year he attended quite a number of international assignments – the climate change conference in Copenghagan, the UN General Assembly, the AU summit in Libya, he was at the Ecowas summit in Abuja, he was in Trinidad and Tobago for the Commonwealth heads of states meeting. We are only in the first quater of this year, and he didn’t attend the AU summit in Adiss Ababa and that is enough to draw a conclusion? I don’t think that is a justifiable conclusion. He responded