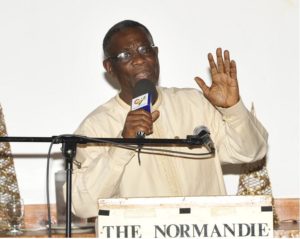 The interaction centered on areas in which Trinidad and Tobago would be of great benefit to Ghana, especially the transfer of technology and the provision of job opportunities for Ghanaians.

Mr Macintosh said his country was prepared to invest, as well as share its expertise, in gas exploration, which he said had been the mainstay of Trinidad and Tobagoâ€™s economy for several years.

He said the company had already sent a team to Ghana to ascertain developments in the emerging oil and gas industry and report back, after which a decision would be taken on areas where it could invest in the gas sector.

He explained that his country had asked the Government of Ghana to spell out the specific areas where Trinidad and Tobago could offer technical assistance and support.

He said Trinidad and Tobago had judiciously used revenue generated from the sale of its gas to provide infrastructure such as potable water, schools, roads and decent accommodation for the people.

According to him, the industry had also offered thousands of job opportunities to the people in terms of on-the-job training which had enabled the youth to acquire skills related to the industry.

Commenting on how the exploration of gas should be handled to minimize the degradation of the countryâ€™s environment, Mr Macintosh said the engineering design for the project should be done in a way that would take care of such concerns.

He said his company was ready to train Ghanaians to form a component part of its operations in Ghana, stressing, â€œIt is our intention to ensure that Ghanaians are exposed to the various skills associated with the gas industry.â€

Meanwhile, President Mills is expected to return home Wednesday, after attending the Commonwealth Heads of Government Meeting (CHOGM) which took place between November 27 and 29, 2009. A statement issued by Mr Koku Anyidoho, the Head of Communications at the Presidency, said on his return, President Mills would leave for the Northern Region capital, Tamale, to participate in this yearâ€™s Farmers Day celebration and stay on to embark on a â€˜thank youâ€™ tour of the region.