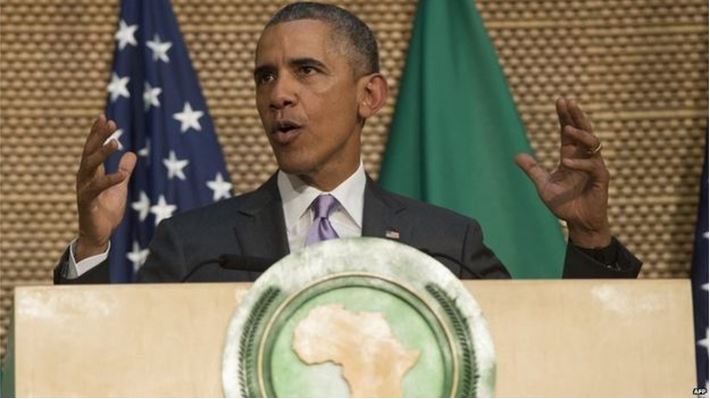 US President Barack Obama has ended his visit to Africa by warning the continent will not advance if its leaders refuse to step down when their terms end.

“Nobody should be president for life,” Mr Obama said.

He was speaking at the African Union’s headquarters in Ethiopia’s capital, Addis Ababa, the first time a sitting US president has addressed the body.

Earlier in the trip, Mr Obama visited Kenya, the homeland of his late father.

“I don’t understand why people want to stay so long, especially when they have got a lot of money,” he told the 54-member AU, an apparent criticism of African leaders who have done just that.

Calling on the AU to ensure leaders respect their constitutions and step down when their term ends, Mr Obama specifically mentioned Burundi, whose president Pierre Nkurunziza has controversially been re-elected for a third term.

“Sometimes you will hear leaders say ‘I’m the only person who can hold this nation together.’ If that’s true, then that leader has failed to truly build their nation.”

He said democracy was about more than just holding elections: “When journalists are put behind bars for doing their jobs or activists are threatened as governments crackdown on civil society then you may have democracy in name, but not in substance.”

And he joked about his own chances of another term in office, which he is constitutionally barred from seeking.