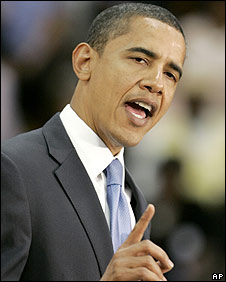 American President Barack Obama has described his visit to Ghana as a meeting of two allies without any hidden agenda.

Responding to concerns that his visit could be in pursuit of American interests in Ghana’s oil find or for the establishment of military base in Africa, he told the Daily Graphic exclusively in response to a questionnaire during his two-day visit to the country, “There is no hidden agenda here.”

“The United States and Ghana enjoyed strong relations long before oil was discovered in Ghana and long before the creation of the US Africa Command (AFRICOM),â€ he added.

Additionally, he said the US was already developing a comprehensive assistance programme for Ghana’s oil and gas sector, including embedded technical advisors and support for the country’s new oil and gas regulatory institutions.

The government of Ghana had earlier requested specific technical assistance from the US in that direction.

He, however, maintained that “all assistance that we provide will be closely co-ordinated with the government of Ghana”.

President Obama said the US was encouraged by the rigorous discussions that had been taking place at all levels of the Ghanaian society on how to cope with the promise of oil wealth so that Ghanaian priorities such as transparency and economic diversification were not swept aside.

Ghana, he said, had set a powerful example of a peaceful, religiously and ethnically diverse democratic society and its leading participation as a troop contributor to peacekeeping efforts was a concrete contribution to promoting security even beyond its borders.

“Our shared interests in regional stability and development make this partnership important to us,” he told the Daily Graphic, and noted that “as we look towards future challenges, including combating the spread of narcotic trafficking in the region and addressing global issues that affect us all, such as climate change, we will continue to value Ghanaian perspectives and work at strengthening our relationship”.

On AFRICOM, President Obama said it was important to dispel any remaining misconceptions.

He explained that the creation AFRICOM was the result of a commonsense reorganisation of the way the US military approached promoting stability in Africa to achieve political and economic growth, adding that its headquarters was in Germany and there were no current plans to relocate that command.

He said Ghana’s thriving democracy .and commitment to the rule of law made it a model for other African nations, explaining that when media images of Africa were too often dominated by crisis and conflict, it was particularly important to hold up positive examples and work to strengthen and deepen partnerships with states such as Ghana that were committed to accountable governance, sustainable development and regional stability.

On the AGOA initiative which appears to be in stalemate, he gave the assurance that he remained committed to a robust, progressive and coherent trade agenda and that AGOA was an important part of that effort.

“My administration is currently reviewing our trade policies and US and African officials will be examining how best to boost our trade and investment relationship and get the most out of AGOA at the AGOA Forum taking place in Nairobi, Kenya, next month,” he told the Daily Graphic.

“We also know that market access alone is insufficient to increase US. Africa trade,” he admitted, pledging that his “administration will work to boost trade capacity throughout Africa”.

He, however, insisted that African governments also needed to work on creating an attractive trade and investment climate.

It was much easier to attract new investors and strike up new deals when there was a demonstrated commitment to transparency, the rule of law and sound economic and regulatory policies on the ground, he added.

“My administration will continue to consult with all African trade stakeholders, including the US Congress, African government officials, the US and African private sector and civil society representatives to find ways to increase two-way trade and restore the role of trade in leading economic growth and development in Africa,” President Obama said.

On climate change, he said African voices must be heard in international discussions on how to address it.

Though the problem was not of Africa’s making, much of the region would experience the consequences, he pontificated.

“Africa is also home to one of the most important carbon sinks in the world in the form of the Congo Basin. So our shared challenge is to work multilaterally to ensure that critical adaptation needs are addressed in ways that make sense for Africa’s development and to ensure that Africa is a part of the solution in terms of using clean technologies in the pursuit of growth,” he said.

“In the immediate term, in fiscal year 2010, I have requested a total of $579 million to help the most vulnerable countries to prepare and respond to the impact of climate change. This represents a $309 million increase over fiscal year 2009 funding. This funding will be used to address three core areas – adaptation, clean energy and forests and land use,” President Obama added.