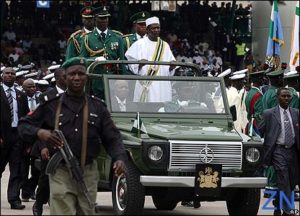 President Umaru Yarâ€™Adua of Nigeria, whose chronic ill health sapped initial promises of reform and led to a constitutional crisis in his country, died Wednesday night, the information minister said in a brief interview. He was 58.

â€œHe has died,â€ said the minister, Dora Akunyili, adding that Mr. Yarâ€™Adua had expired at the presidential villa in the capital, Abuja.

Mr. Yarâ€™Adua suffered from kidney and heart ailments, and his health had been one of the countryâ€™s top concerns for weeks, ever since he departed at the end of November for emergency treatment in Saudi Arabia.

He did not transfer power when he left. In the following months, Nigeria, already racked by low-level civil wars over oil and religion, was left in limbo. There was no center of authority, and a peace plan Mr. Yarâ€™Adua had enacted for the violence-plagued oil-producing south seemed in danger of falling apart.

Mr. Yarâ€™Adua, shielded by his wife and other supporters, did not appear in public and made no statements, apart from a few faltering words to the BBC in January from his hospital room. As public anger over the power vacuum grew amid fears that the country would revert to military dictatorship, the National Assembly reluctantly acted in February, handing power over to Mr. Yarâ€™Aduaâ€™s vice president, Goodluck Jonathan.

Ever since, Mr. Jonathan has called himself merely the â€œacting president,â€ proceeding on the assumption â€” which few people among the countryâ€™s political class or media shared â€” that Mr. Yarâ€™Adua would one day return to office. He was taken back to Nigeria in the middle of the night on Feb. 24, but was seen by no one outside his immediate circle. There were public demands that Mr. Jonathan meet with him, but there was no indication that he had done so.

Increasingly discounted as a political force, by virtue of his presence Mr. Yarâ€™Adua placed an additional question mark over the presidency of Mr. Jonathan, a native of the rival southern half of Nigeria. That has now been removed.

Mr. Yarâ€™Adua, a soft-spoken former governor from the countryâ€™s Muslim north, won a deeply flawed election in 2007 that included credible reports of fraud and ballot stuffing. Still, the election was seen as an advance in a vast, populous and resource-rich country that less than a decade before had been enduring a brutal military dictatorship.

Trained as a chemist, he was born Aug. 16, 1951, into a political family. His father became a minister soon after Nigeria gained independence, and his brother held a ranking post in a military government of the late 1970s.

Nigerians, keenly aware that their impoverished and wealth-stratified nation has not realized its potential, had hopes that Mr. Yarâ€™Adua might help it do so. He promised to tackle a culture pervaded by corruption, improve the shaky to nonexistent electricity supply, and end the violence that crippled production of oil, Nigeriaâ€™s principal source of cash.

But his truncated presidency fell short on all three points. The leading anti-corruption official in the country was chased from office after vigorously pursuing high-level graft, including among Mr. Yarâ€™Aduaâ€™s supporters. The lights continue to flicker on and off throughout the country. And the Niger Delta, although less incendiary than in some previous years, still experiences periodic flare-ups. The shadowy rebel groups in that region purport to fight under a banner that nonetheless remains as glaringly real as when Mr. Yarâ€™Adua took office three years ago: Nigeriaâ€™s vast inequities in wealth.