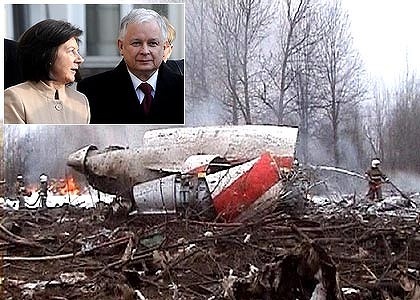 President Lech Kaczynski and scores of other senior Polish figures have been killed in a plane crash in Russia.Polish and Russian officials said no-one survived after the plane apparently hit trees as it approached Smolensk airport in thick fog.Russian media reports said the pilots ignored advice from air traffic control to divert to another airport.Poland’s army chief, central bank governor, MPs and leading historians were among more than 80 passengers.Prime Minister Donald Tusk said the crash was the most tragic event of the country’s post-World War II history.Â The Polish delegation was flying in from Warsaw to mark the 70th anniversary of the Katyn massacre of thousands of Poles by Soviet forces during WWII.The BBC’s Adam Easton, in Warsaw, says the crash is a catastrophe for the Polish people.He says Prime Minister Tusk was reportedly in tears when he was told.After an emergency meeting of ministers, Mr Tusk, who runs the day-to-day business of government, said a week of national mourning had been declared with two minutes of silence on Sunday at midday.Â He said he would travel immediately to the site of the crash, in Smolensk, where he would be joined by Russian Prime Minister Vladimir Putin.Mr Tusk added: “The Polish state must function and will function”.A government spokesman said that according to the constitution there would be an early presidential election, and the speaker of the lower house of parliament, Bronislaw Komorowski, would be acting president.In Warsaw, people have been gathering outside the presidential palace to lay flowers and light candles.“I’m all broken up… it cannot be expressed in words,” Ewa Robaczewska told Reuters news agency.Pilot error?The Russian emergencies ministry told Itar-Tass news agency the plane crashed at 1056 Moscow time (0656 GMT) as it was coming in to land.Smolensk regional governor Sergei Antufiev told Russian TV that no-one had survived.“According to preliminary reports, it got caught up in the tops of trees, fell to the ground and broke up into pieces,” he said. “There are no survivors in that crash.”Polish Foreign Ministry spokesman Piotr Paszkowski said it could be assumed with “great certainty” that no-one had survived.Polish TV worker Slawomir Wisniewski said he had seen the crash from his hotel near the airport.“I saw through the fog, the aeroplane flying very low with the left wing pointing to the ground,” he said.“I heard something being broken and then that thudding sound. Two flashes of fire next to each other.”Russian media carried claims that the plane’s crew were at fault for the crash.“Flight controllers… suggested that the plane be forwarded to Minsk but as far as we know the crew took an independent decision to land the plane in Smolensk,” Smolensk regional government spokesman Andrei Yevseyenkov told Russian TV.Russian officials said 96 people were killed in the crash. Polish officials said there 88 people in the delegation travelling to the Katyn commemoration.Russian investigators had earlier said there were 132 people on the plane.Mr Putin said he would personally oversee the investigation into the crash and that the bodies of the victims would be taken to Moscow for identification.Russia would observe a day of mourning on Monday, the prime minister said.Russia’s Emergency Minister Sergei Shoigu said both of the plane’s flight information recorders had been found and were being examined.Controversial figureLech Kaczynski The president was flying in a Tupolev 154, a Soviet-designed plane that was more than 20 years old.Our correspondent says there had been calls for Polish leaders to upgrade their planes.Mr Kaczynski himself had suffered scares while using the plane in late 2008, when problems with the aircraft’s steering mechanism delayed his departure from Mongolia. It was then caught up in turbulence flying to Seoul.“Any flight brings with it a certain risk, but a very serious risk attaches to the responsibilities of a president, because it is necessary to fly constantly,” he was quoted as saying at the time.But the head of Russia’s Aviakor aviation maintenance company told Russian TV the plane was airworthy, after his plant fully overhauled it in December.As well as the president and his wife, Maria, a number of senior officials were on the passenger list.They included the army chief of staff Gen Franciszek Gagor, central bank governor Slawomir Skrzypek and deputy Foreign Minister Andrzej Kremer.World leaders including Ghanaian President Atta Mills, Russian Prime Minister Vladimir Putin, US President Barack Obama, German Chancellor Angela Merkel and UK Prime Minister Gordon Brown offered their condolences to Poland.Mr Kaczynski, who had fewer powers than the prime minister but had a significant say in foreign policy, was a controversial figure in Polish politics.He had advocated a right-wing Catholic agenda, opposed rapid free-market reforms and favoured retaining social welfare programmes.