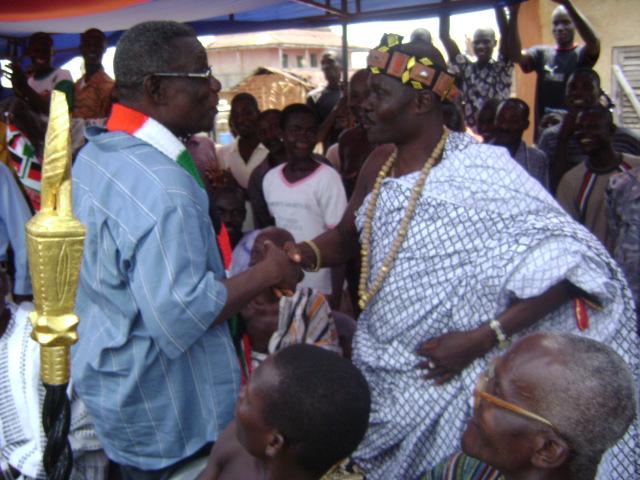 President John Evans Atta Mills has been found wanting in delivering on his promise regarding his assurance to appoint Chief Executives and 30 per cent of the membership of Metropolitan, Municipal and District (MMD) Assemblies (MMDCEs), in direct consultation with traditional rulers.

The President had told a 13-member delegation of the National House of Chiefs, when they called on him at the Castle, Osu, on January 19, 2009, that since both the government and traditional rulers sought the welfare of the people, there was the need for the two institutions to work very closely with each other to build a better Ghana.

He observed that chieftaincy was at the core of the Ghanaian society, and reiterated that government would collaborate with traditional authorities and put matters concerning traditional rulers on the front burner.

President Mills also decried the disrespect shown by some MMDCEs to traditional rulers, but turned round to solicit their help in times of challenges, stressing the need for consistency in their relations.

According to President Mills, he recognized the vast knowledge of traditional rulers, and said he would not only tap into it, but also accepted an invitation to “pop in from time to time” in their deliberations as he did during the campaign, in the run up to the elections.

Most MMD Assemblies across the country have already sworn-in government appointees following their nomination by the government.

The President has, however, not kept faith with traditional rulers in this regard and the anomaly has thus been brought to the attention of the President, through the Ashanti Regional Minister, Mr. Kofi Opoku Manu.

In a petitioned dated February 20, 2009, and copied to the NDC leadership in Ashanti, as well as the constituency chairman and the Municipal Co-ordinating Directors, the Omanhene of Bekwai Traditional Area, Nana Karikari Appau II indicated that at the time he raised the concern most of the MMDAs in Ashanti and other regions had been reconstituted, but he had no idea as to the composition of the 30% government appointees to the Bekwai Municipal Assembly and the Amansie Central District Assemblies at Jacobu, which falls under his jurisdiction.

He said even though the Bekwai Traditional Council was supposed to be represented in the Assembly, he did not know the Council’s representative at the Assembly.

Nana Karikari Appau reminded the President of the avowed commitment of his government to sustain consistency in relations between Nananom and government functionaries, with special reference to MMDCEs and hoped that the anomaly would be corrected to give meaning to the President’s assurance to Nananom.

“I hope the necessary action would be taken to make what the President promised come to fruition, in order for the authority of the President not to be undermined by such inconsistencies in policy statements and directives,” the Omanhene advised.