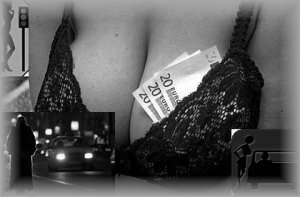 The BLESSING of oil-find to Ghana has been defiled with the CURSE of loads of prostitutes of all shapes and sizes to the Western regional capital of Takoradi, buttressing the age-old saying that wherever GOD ALMIGHTY cooks his AMPESI, Satan-the-horrible chooses that same place to roast his KOOBI.

The human parasites, known by the derogatory word SISTERS are two of a kind with some parading under the tag LOCALS from the vicinity and other parts of the country on the one side, and FOREIGNERS from neighbouring countries such as next-door Togo, Benin, Nigeria and Cameroun.

Like toilet that always attracts a jubilant troop of flies clapping noisily to the eardrums of hell, these prostitutes have been enticed from across the miles by the presence of Danish, Norwegian, Scottish, English and other oil-drilling expatriates from Europe and elsewhere.

THE SUN can confirm today that at most of the leading hotels situated on the BEACH ROAD drive further south to the Atlantic Ocean, night life has been swallowed by these crop of prostitutes who cleverly slap a bill on willing clients in foreign currency.

The paper discovered that even though most of the preliminary oil-work is done miles away offshore from Takoradi, just around the Cape Three Points area into the Atlantic Ocean, the expatriates still find the time to drive down to Takoradi, where hotel facilities are much better only to be followed by the SISTERS just as a shadow follows its substance.

Only last week a raging bout of friction almost nearly developed, when local prostitutes grouped under one umbrella to protest the over-bearing presence of foreign prostitutes they claim, have suddenly emerged to scavenge threateningly on the same Ã¢â‚¬ËœGOODSÃ¢â‚¬â„¢ in what they say is their land of birth.

Just around the roundabout leading to the BEACH ROAD, ugly scenes almost nearly marred what looked to be a promising Saturday night, had taxi drivers not played smart by carting a particularly violent and noisy group of what sounded to be from the FOREIGN group away from the charging threats of the LOCALS.

THE SUN discovered that most foreign prostitutes looked well-cut for the nocturnal job which was evidenced in their dressing, make-up, hair-do and the soothing aroma of perfume wafting romantically into the atmosphere. Ã¢â‚¬Å“We are sophisticated and appeal the more to the WHITE MEN and that is why you people are jealousÃ¢â‚¬Â, a skeletal yet shapely damsel fit enough to decorate the romantic bed ofÃ‚ biblical KING SOLOMON yelled as she jumped into a crawling taxi that had pulled up at that God-forsaken hour of the dying embers of the night.

THE SUN discovered that on the average if truth ought to be told in all sincerity, the local prostitutes are no match for the foreign bunch who wallow in all kinds of prop-ups to catapult their beauty so professionally that, it is evidently conspicuous enough to sweep expatriates off their feet.

Interestingly Police on night patrols appear not to look too bothered as fights over clients and noisy prattles puncture the otherwise calm midnight, as one night fades into the approaching embrace of another.

On the flip side of life the deadly HIV scourge still lurks around and much worse, there are no readily authentic and verifiable statistics of the immediate trend, which then paints a most horrific picture of what could play out as a result of these nocturnal endeavours in the hell to come.

THE SUN can beat a retreat back into the late 1980s, 1990s till date when this same Western region suffered the brunt of the HIV-AIDS scourge, when a flock of sexually ignorant and pliable females flocked to the Ivory Coast to seek green economic pastures.

Today foreign prostitutes have turned the tide and are in our midst except that our locals figure they are being hemmed in in the land of their birth, where they now see the potential of the grass being greener just where they stand except that, they lack the sophistication and wherewithal to match the foreigners BOOBS for BOOBS, WAIST for WAIST, LOOKS for LOOKS and APPEAL for APPEAL.