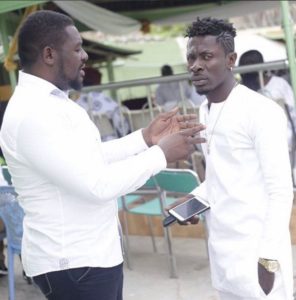 Lawrence Nana Asiamah Hanson, former manager of dancehall artiste Shatta Wale says signing a binding contract with the artiste was not his prime concern during their stint together.

He said he was so focused on pushing the brand of the dancehall artiste, born Charles Nii Armah Mensah Jnr. that a contract was “irrelevant” to him.

Shatta Wale and Lawrence, popularly known as Bulldog, parted ways in October this year after working for about three years.

In a bare-it-all interview on Pluzz FM after their split, the 2014 Ghana Music Awards Artiste of the Year winner made startling allegations against his former manager including a claim that Bulldog had threatened to kill him. He revealed there was written contract between them.

Shatta Wale alleged that, “There was no agreement in this thing; there was nothing like 50-50. When I get it and we share it 50-50 it was just between me and Bulldog. I love him as a brother and I wanted him to enjoy…same as my whole shatta movement crew so nobody should take this thing anyway; I am just putting things across the way it has to be.”

Reacting to the allegations in an interview on Hitz Gallery on Hitz FM with Dr Pounds Monday night, Bulldog said a written contract to manage Shatta Wale was irrelevant to him

“So get that contract thing out of your head because really the contract is between me and him. It’s not your business. My business is to make sure my artiste is all over the place with or without a contract. So it’s irrelevant,” Bulldog stressed.

Shatta Wale alleged that Bulldog and his Bullhaus Entertainment outfit did not enhance his career as an artiste. He noted that he rather worked for his success.

“This is a guy that I took like my brother so there is nothing like regret but I have learnt. Maybe, I think that how I started with this career should continue that way. I should work with people who are professionals and just pay them to work for me. Bulldog doesn’t have any professional competence. I, Shatta Wale, nurtured everything you are seeing around me. I am the controller of this whole ship. I put Bulldog in the picture just for people to give him that respect,” he said.

Bulldog responding to the allegation said he is not prepared to go into an argument of whether as a management team they helped Shatta Wale or not. “… We’ve chosen not to discuss it… It’s for the public to judge whether we did something or not. Really if the person feels we didn’t do anything for [him] what can we do about it?” he said.

For the artiste manager, who has had managerial stints with several artistes including Iwan, he will treat all allegations by Shatta Wale with a pinch of salt because “if you live with a person for a long while you will know them. So nothing that they do will [surprise you].”

As to whether he, Bulldog threatened to kill the dancehall artiste, he said he won’t comment stating the matter is being investigated by the police.

In spite of everything, Bulldog says he still loves Shatta Wale, his music and his brand.