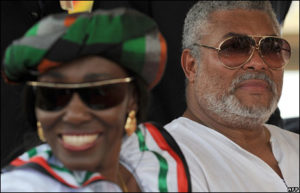 FORMER PRESIDENT and founder of the National Democratic Congress (NDC), Jerry John Rawlings, has once more descended on President John Evans Atta Mills, his appointees, and some leading members of the ruling party, saying they have been ungrateful to those who laid down their lives to bring the party back to power.

He also revealed that some members of the Mills government and party officials had gone to the extent of sponsoring some serial callers to insult him (Rawlings) on radio.

According to him, he was compelled to come out publicly to speak his mind about the government because genuine advice he offered was disrespectfully ignored, adding that very soon he would have no option but to start mentioning names.

Addressing a gathering at a symposium organized by National Cadre Front and the United Cadre Front in Tema to commemorate the 31st December Revolution, Rawlings observed with regret ‘the culture of money politics’ that had been introduced into the party.

He noted that those guilty of such behaviour were toying with the destiny of the party at their own peril.

Sounding a word of caution, the NDC founder said the party was not used to money politics, and expressed worry over reports that such influences, threats from certain government circles, misuse of armed security personnel to intimidate and prevent legitimate candidates from vying for political offices and promises of potential benefits being made to delegates were against the spirit of 31st December.

â€œOne day, I will come out and give you details of all the advice I have given that has been ignored. These people are showing disrespect and contempt after we worked hard to win the election.â€

He said at some party meetings, certain leading members had the audacity to question why his comments and criticism should be accepted because, according to them, he (Rawlings) had made no monetary contribution to the party.

â€œSo embarrassing was this to many party faithful that they went around and sought financial support for me to donate to the party; but I did not accept those monies. What I brought into the party was too invaluable to quantify in monetary terms.

I brought on board integrity, I brought sacrifice – the blood of those who had died fighting for the ideals of the PNDC and NDC. We must learn to show respect for what people have done.

â€œThere are too many wrongs because we fail to take the high moral ground when it matters most,â€ the former President said.

He argued that the defeat of the New Patriotic Party (NPP) in the last election was yet another revolt following the moral decay that the country had experienced, and was worried that the ruling NDC was also neglecting calls for transparency and accountability.

Former President Rawlings noted that 31st December was not just another day. According to him, â€œIt reminds us of the principles of probity, accountability, integrity and justice.

Unfortunately, we are allowing the moral fabric of the NDC to deteriorate. Our party was built on a foundation of visionary leadership and self-discipline.

â€œNDC has never used money for political positions. Let us not make the same mistakes some made.â€

He stressed that the 31st December Revolution of the Provisional National Defence Council (PNDC) gave birth to the NDC and noted that it would simply be unacceptable if the government of the day could not uphold the principles that gave it life.

â€œLet us not be seen to be so power hungry we fail to follow the time tested due process that made NDC the party it is today. We toy with the party’s destiny at our own peril,â€ he concluded.

As the former president, his wife, Nana Konadu Agyeman Rawlings, and other leading party members walked out of the main hall of the TDC Club House, venue for the occasion, several party faithful who could not get space inside the main auditorium took consolation in getting closer and trying to touch them amidst shouts of ‘Efo we love you’.